As we know, a lot of IDEs exist in the market, which makes the life of a developer very easy by providing various features such as "Auto code completion", "Syntax Highlighting", "Debugging", etc. Eclipse is one of the most used IDE by the java developers. Now to make use of any third-party libraries in a project, all of these IDEs provide their ways to integrate and use functionalities of those libraries in your project. As we know, all the Java libraries are bundled and provided as JARS(Java Archives), which can be included in a project and then the project can invoke the needed functions of various classes bundled in those jar files. Similarly, Selenium WebDriver for Java also provides a set of jar files, which we need to include in the project to access and use the functionalities provided by Selenium WebDriver. Therefore, we will discuss Selenium Eclipse subsequently.

How to configure Selenium WebDriver in Eclipse?

Launch Eclipse and create a workspace?

The first step for a start using the Eclipse IDE  is to download and start the Eclipse. Once Eclipse will be started, it will ask you to create a workspace.

Note: Eclipse workspace is a directory on the system where all the Eclipse plugins, configurations, or other project-related information will be stored.

You can follow the steps detailed in the article "Download and Start Eclipse" to kickstart the installation and start of Eclipse.

After setting up the workspace, the next step is to create a "Project " in Eclipse. Let's see how we can achieve the same in Eclipse:

Create a new project in Eclipse?

Before you create a new project in Eclipse, you need to know what it is? A project is a collection of source files and the settings which help to build, run, and debug the source files. In Eclipse, a project is on the topmost hierarchy, just after the workspace. One project will contain all the related source files and dependent libraries. You can have multiple projects under one Eclipse workspace.

Follow the steps as mentioned below to create a new Java Project in Eclipse: 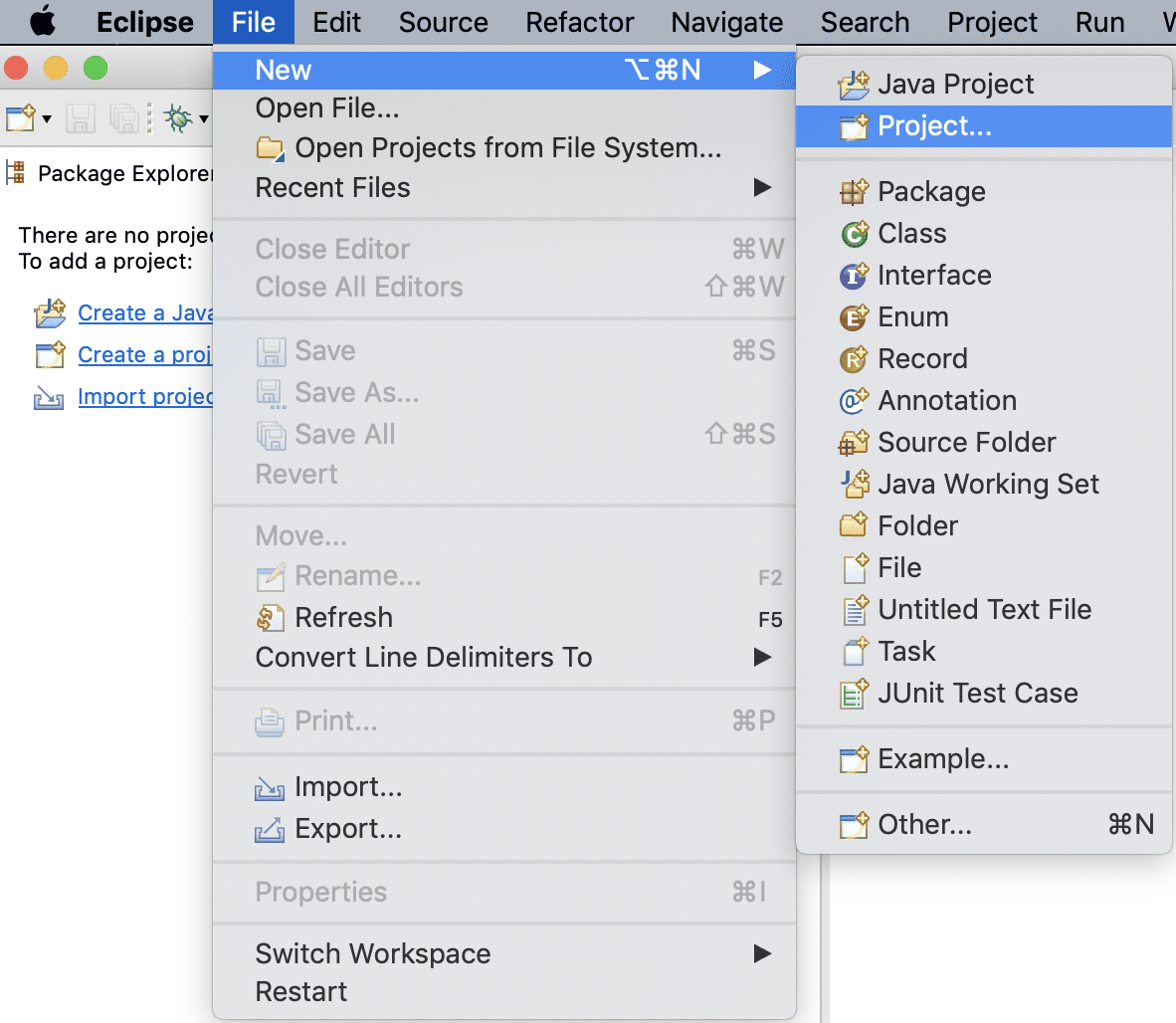 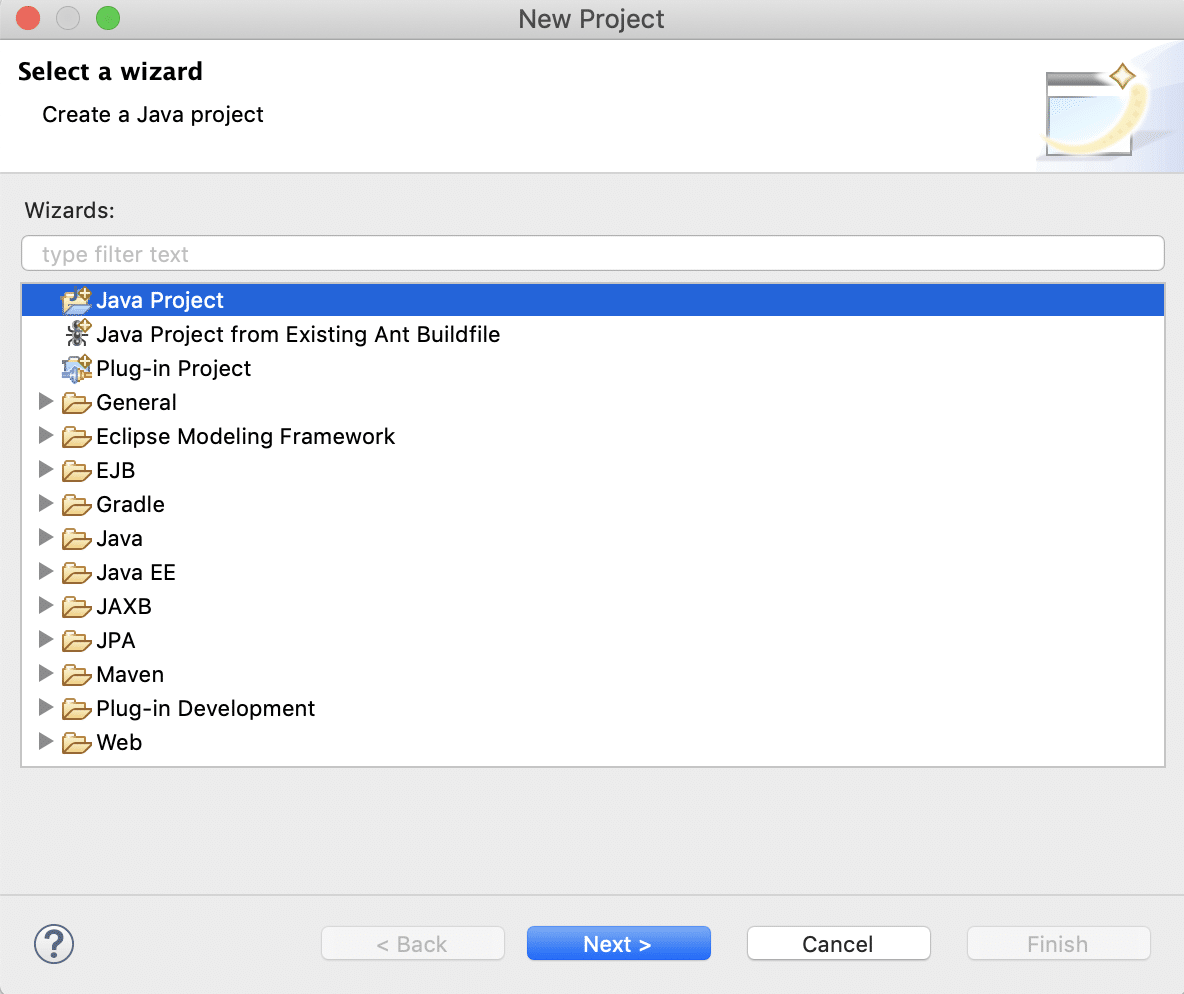 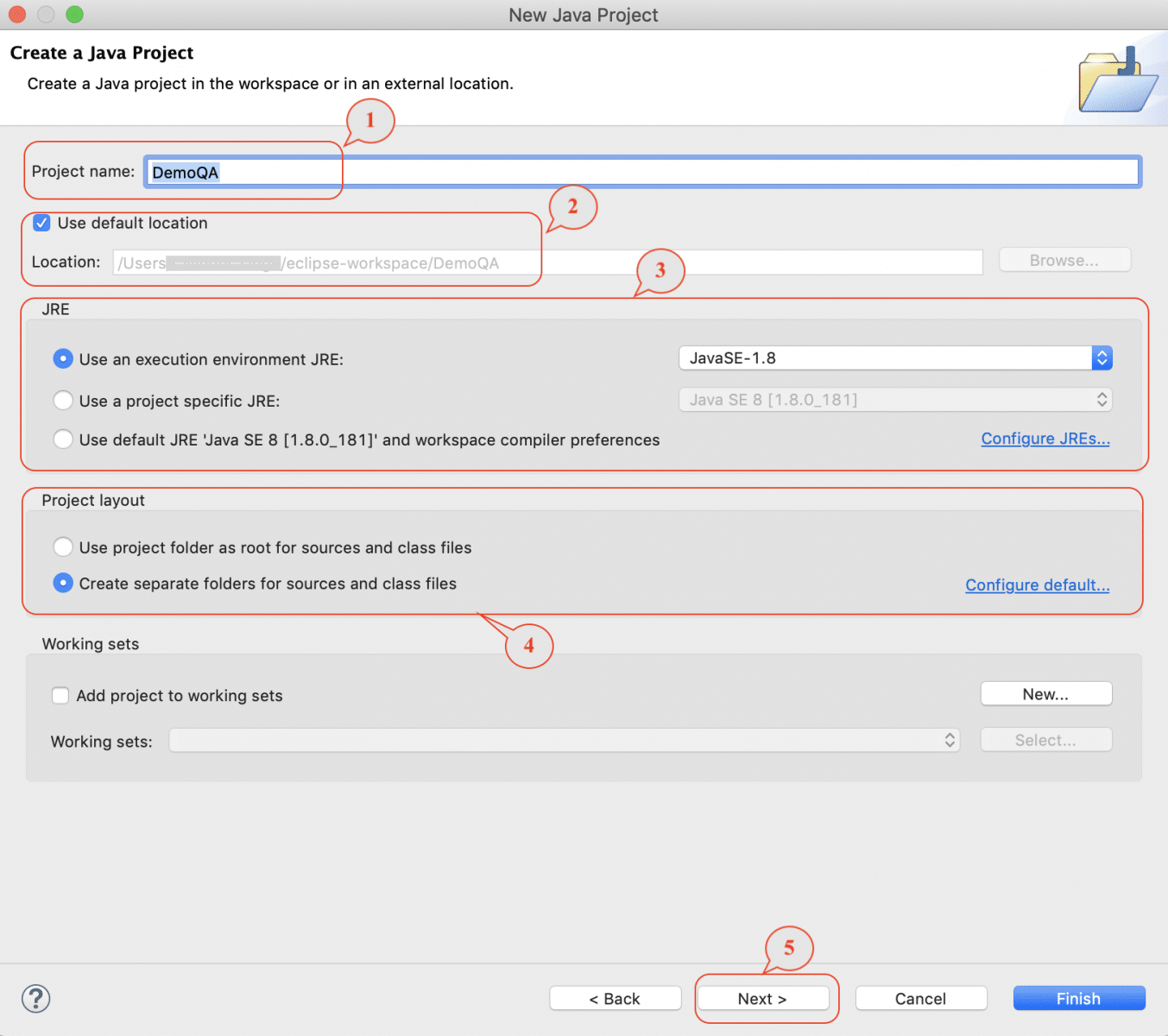 As we can see, we have specified the following options on the above dialogue box: 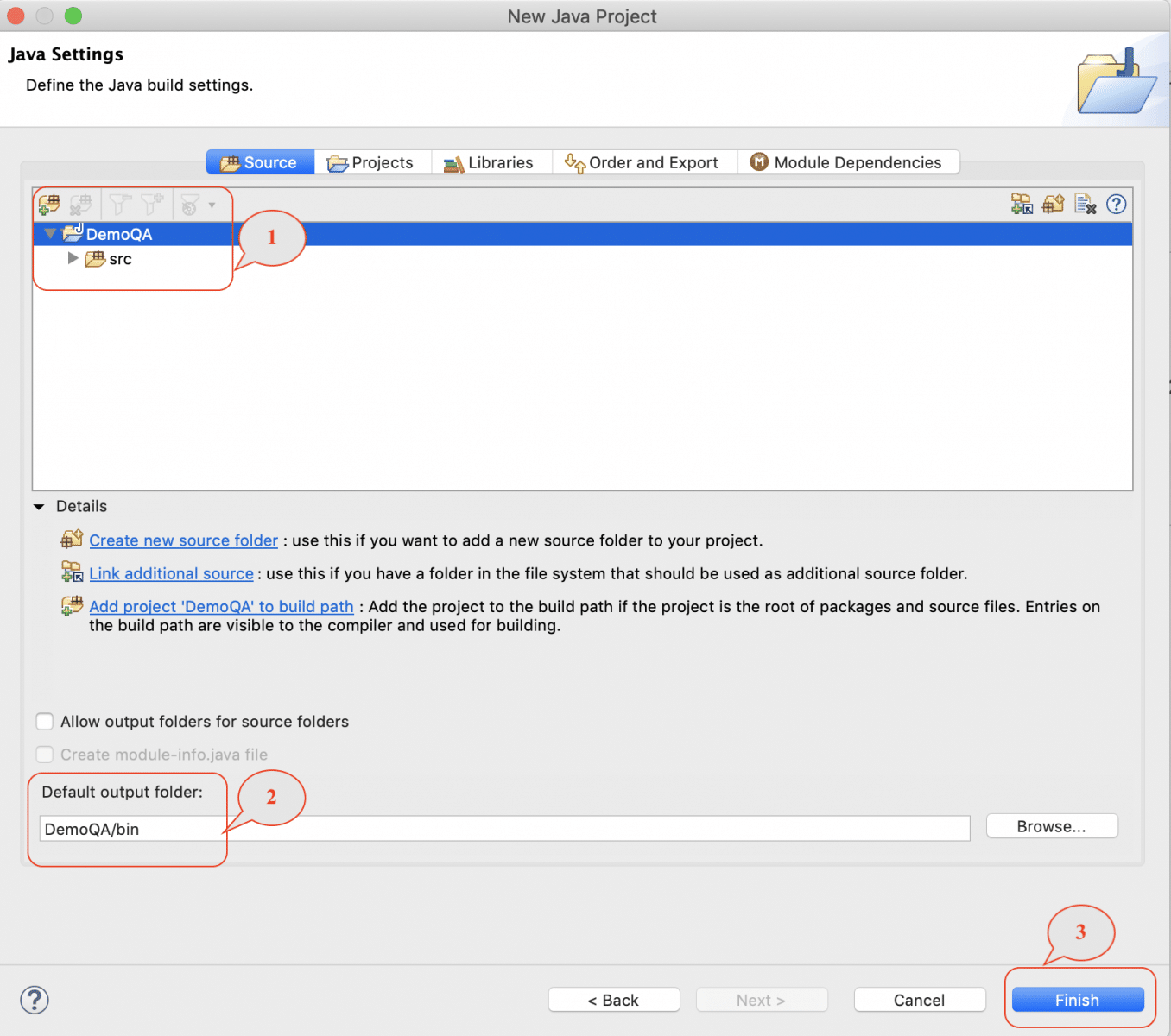 Note: The above dialogue-box will only appear for the "Eclipse enterprise version", as this version can be used for the development of other types of the project also(apart from Java), and every kind of project has its perspective.

Create a new package under the project

To create a new package under the newly created project "DemoQA", follow the steps as mentioned below: 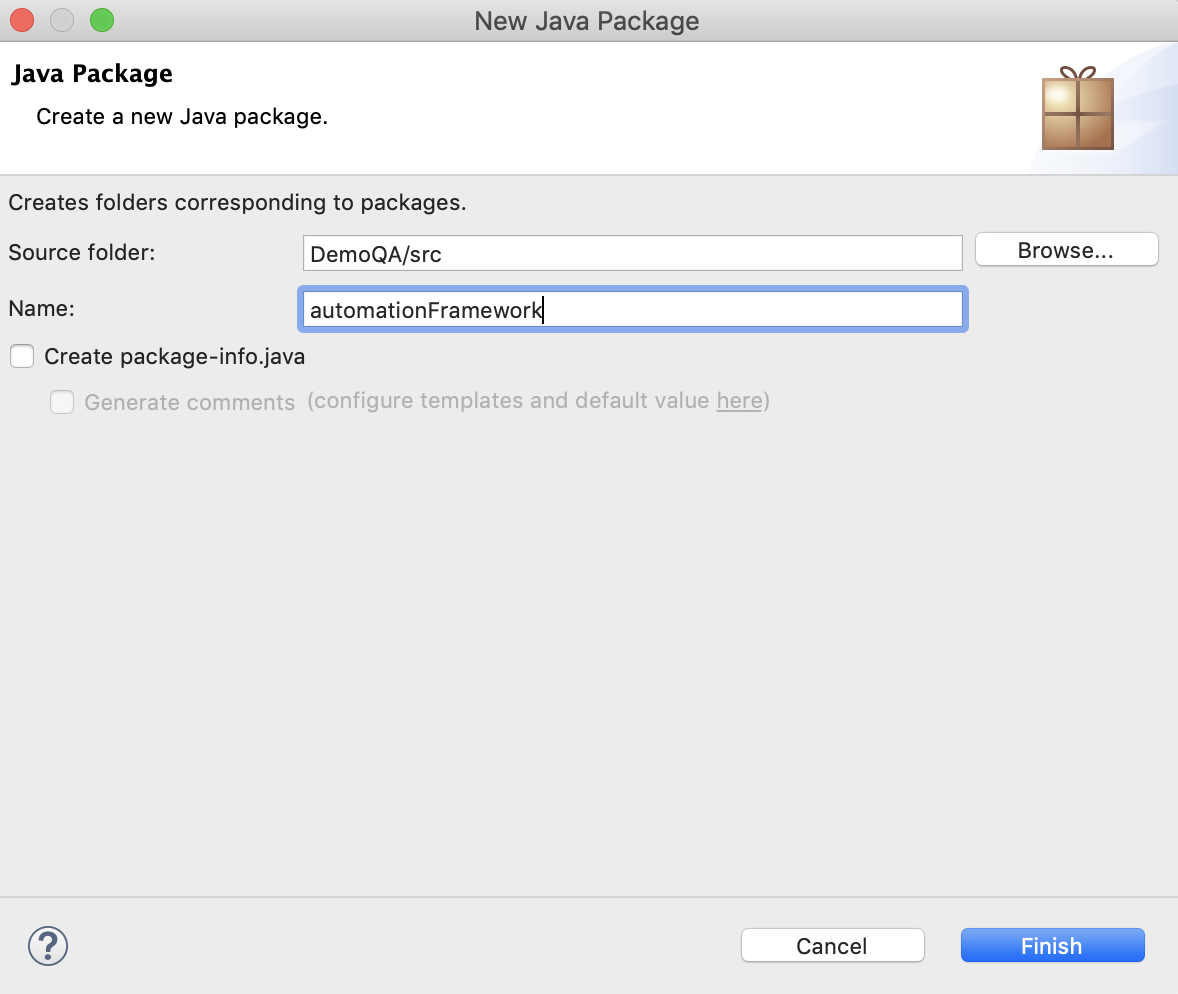 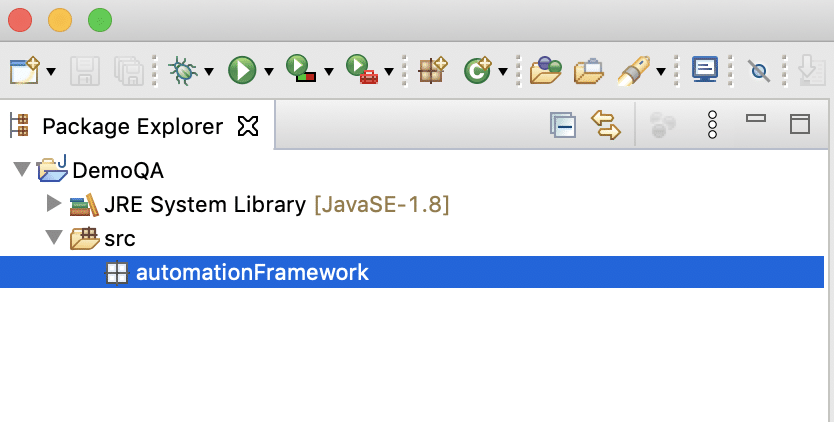 Once you finish creating a package under the project, the next step is to create a Java class under the package, which will write the test cases using Selenium WebDriver.

Create a new class under the package

Now that we have the project & the package created, we will require class(es) to write the code. To create a new class, follow the steps as mentioned below: 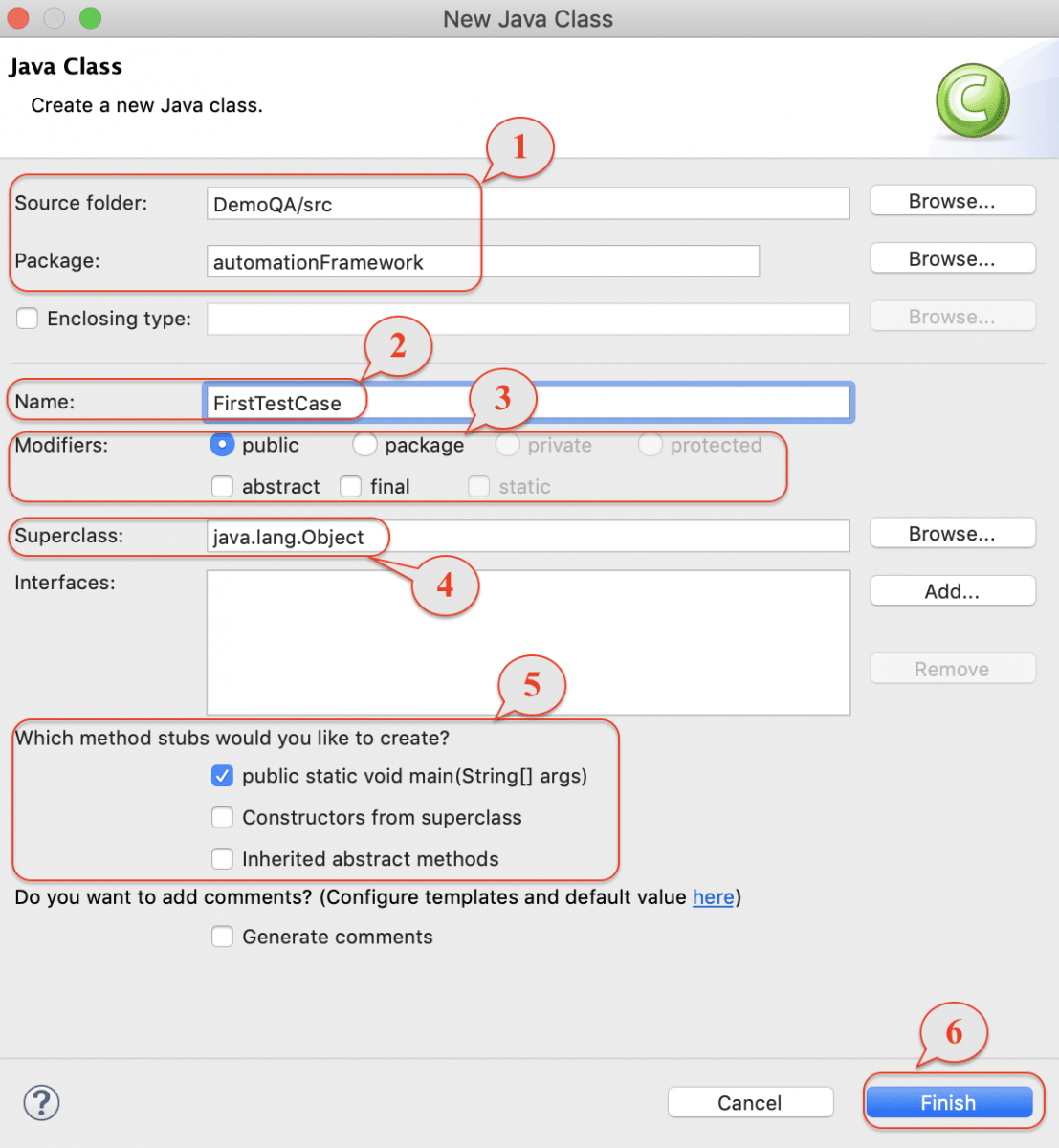 Conclusively, now we have a placeholder available where we can write our Selenium test cases.  The next step is to include the various libraries provided by "Selenium WebDriver " in the newly created project. Let's how we can consist of the Selenium WebDriver libraries in a project in Eclipse?

How to add Selenium WebDriver Jars to the project? 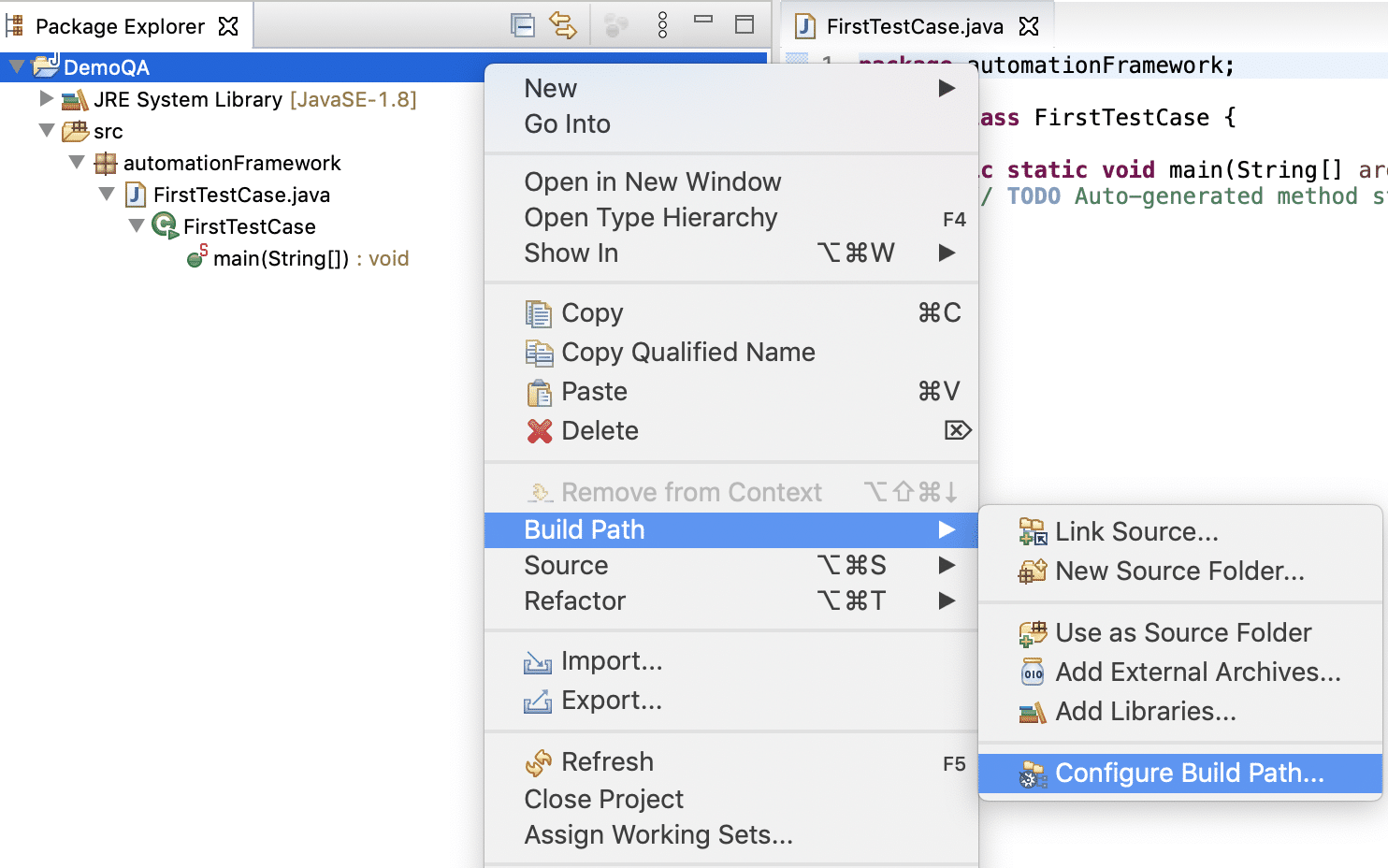 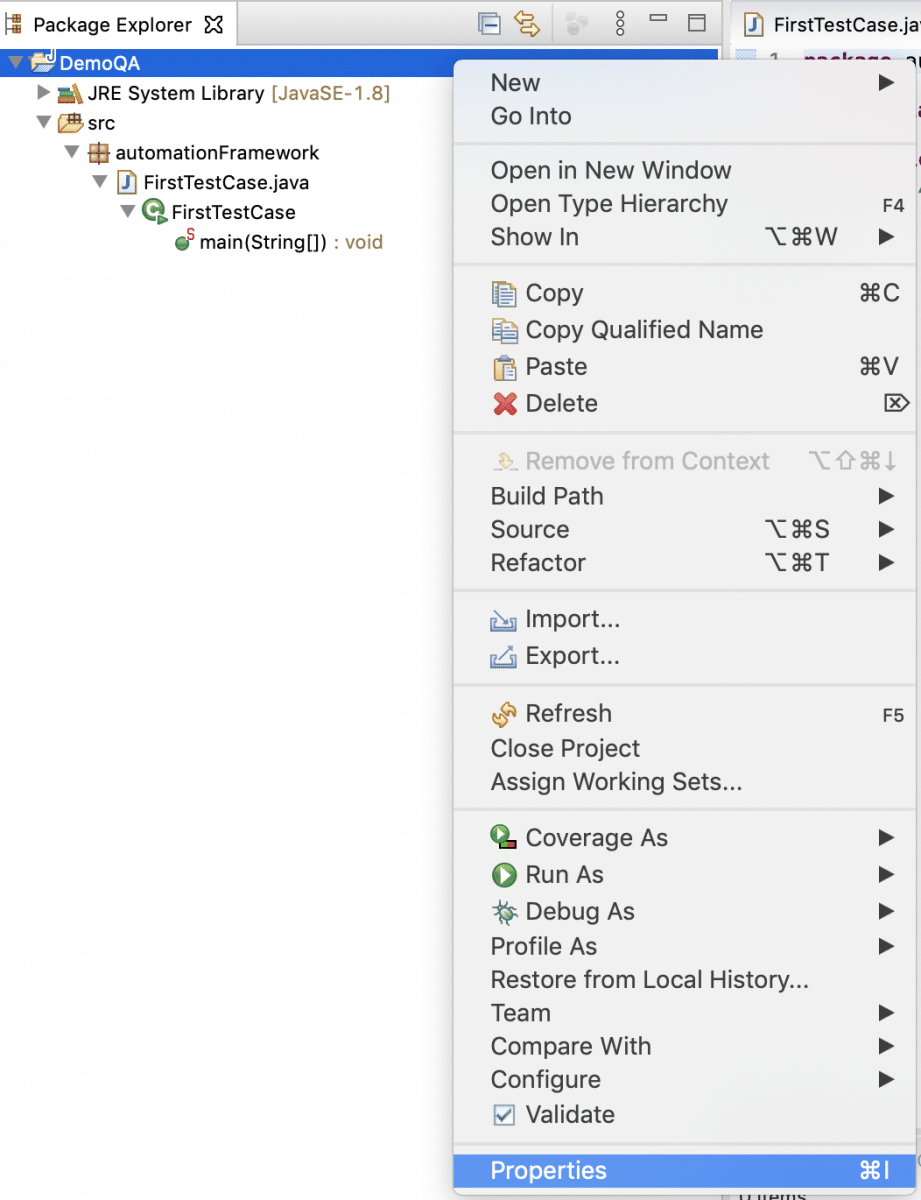 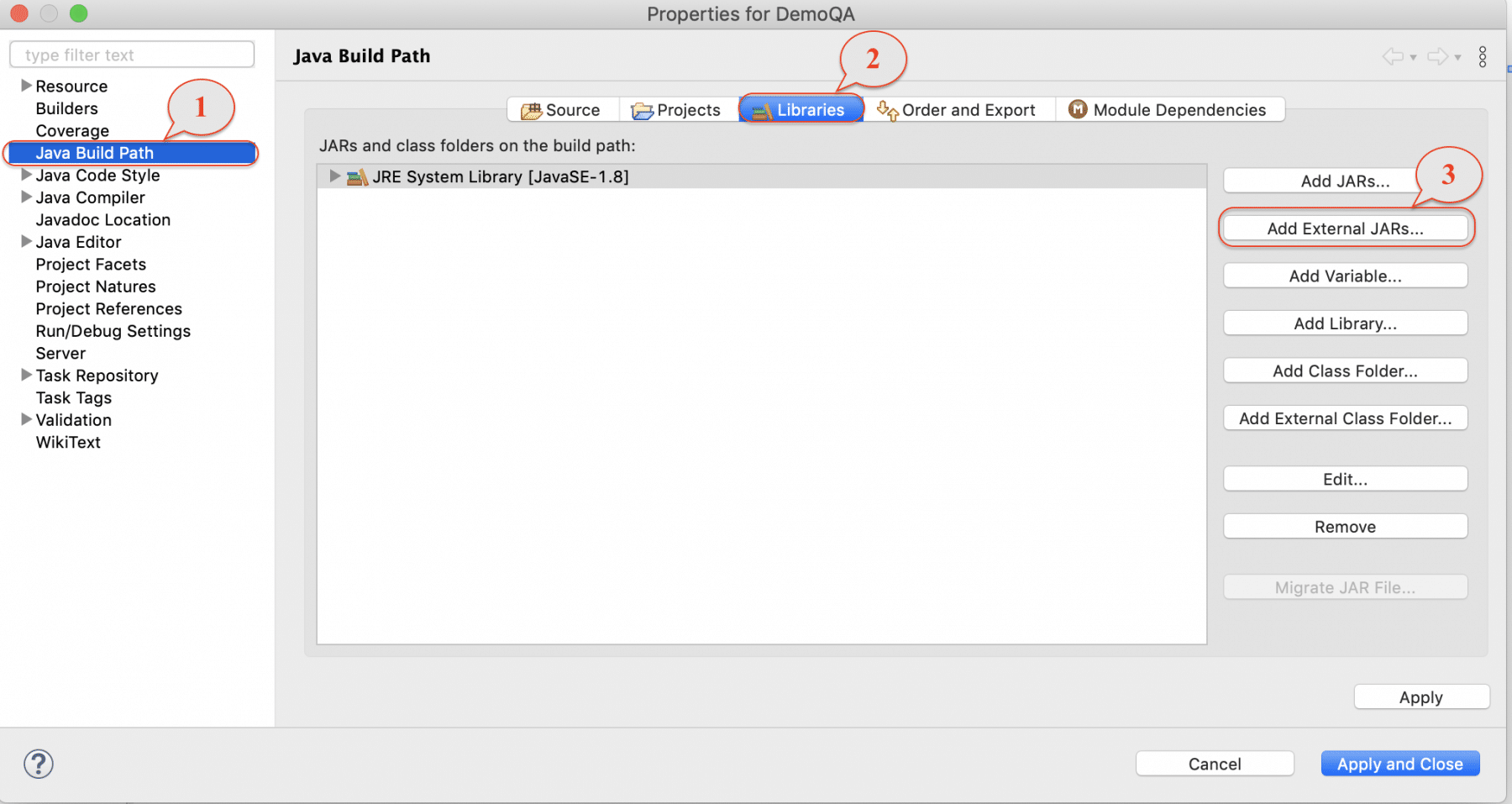 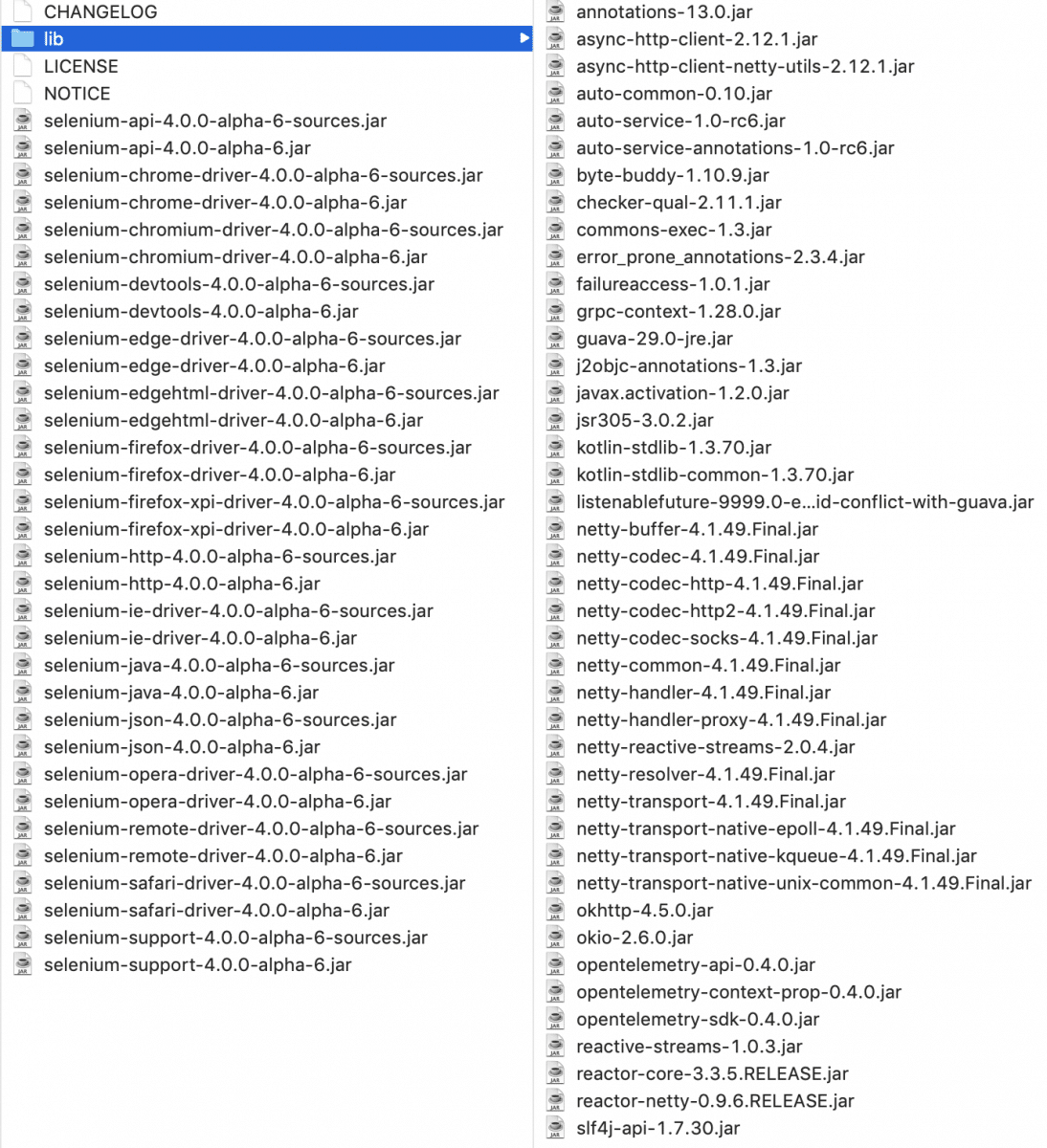