We all know that Software Testing is an integral part of SDLC, and sometimes it involves a lot of repetitive tasks, combing over scenarios over and again. Now to reduce these repetitive efforts, software testers need the help of some tools which can enable them to automate these repetitive tasks. One of the great suites of automation tools is Selenium, which provides the capabilities to automate user actions on a web application. It is an open-source umbrella project for a range of tools and libraries that enable and support the automation of web browsers. Let's understand in this article all the intricacies of Selenium Automation Testing by covering the details across the following topics:

What is Selenium Testing?

As we discussed, Selenium is a set of open-source web automation tools that leverages the power of web browsers and helps in automating workflows of how users interact with the web application within the browser. The primary purpose of Selenium, as highlighted by the Selenium Website, is - "Selenium Automates Browsers, What you do with this power is entirely up to you". Even with the emerging tools and technologies, Selenium is still leading the board in the list of Web Automation tools and Automation Testing. The below survey conducted by Katalon depicts the popularity of Selenium: 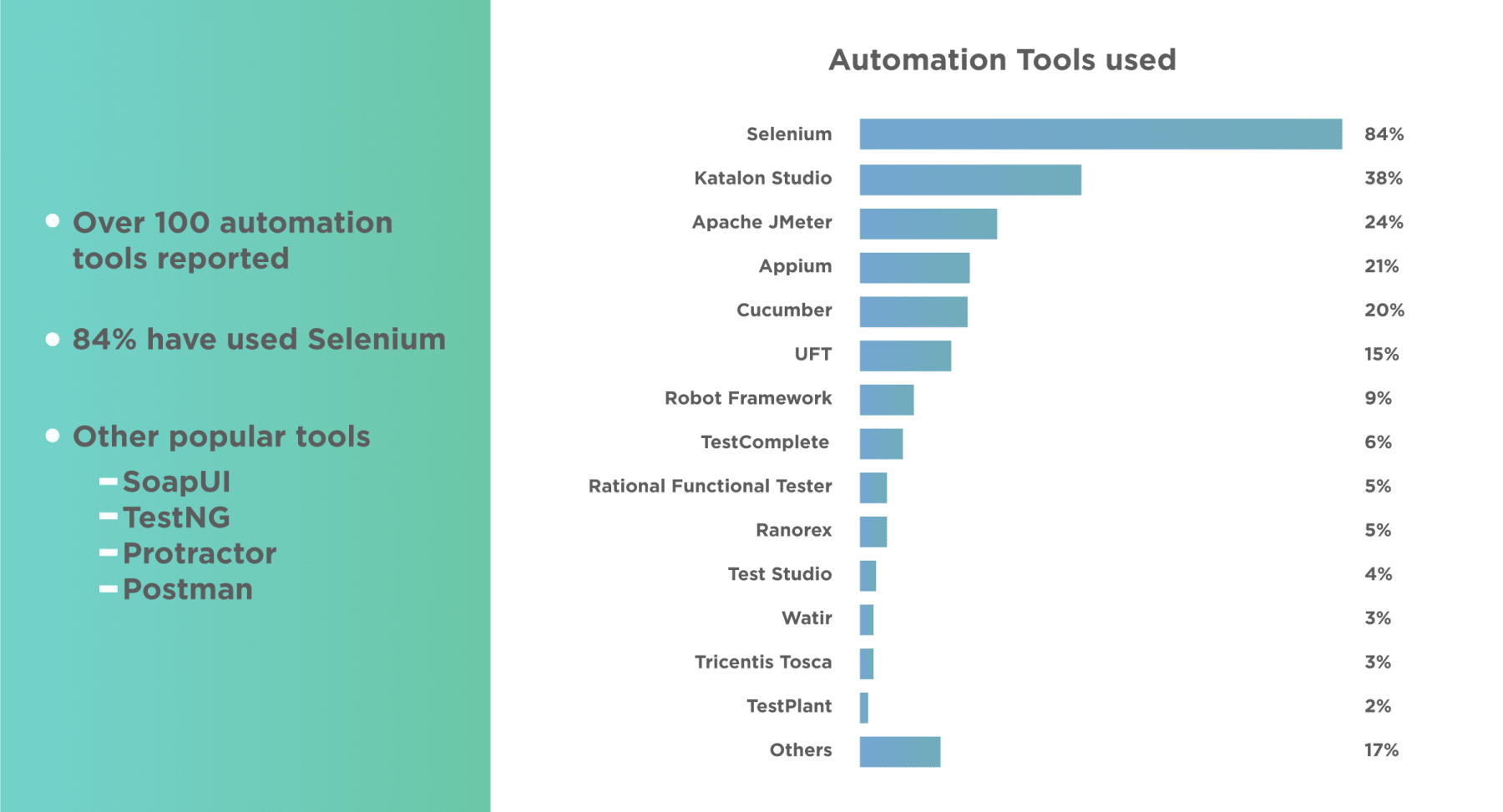 Such a popular tool and so much broad audience before understanding the further details of Selenium suite, let's know how Selenium came into existence and what was its initiating point:

The history of Selenium tracks back to the early 2000s. Jason Huggins, an engineer in ThoughtWorks, created a JavaScript module. Its name was JavaScriptTestRunner, for the automation of an internal website. The name Selenium comes from a joke made by Huggins, saying that "you can cure mercury poisoning by taking selenium supplements". Even though this was just a joke while mocking a competitor named Mercury, others who received the email with the joke, took the name and ran with it. The following figure shows the evolution of Selenium throughout the years:

What are the various components of Selenium?

As we discussed above, Selenium is not just an automation tool. It is a suite of tools, and each tool in the suite have specific unique capabilities that help in designing and development of automation framework. All these components can be either used individually or can be paired with one another to achieve a level of test automation.

The below figure shows various components of the Selenium Suite: 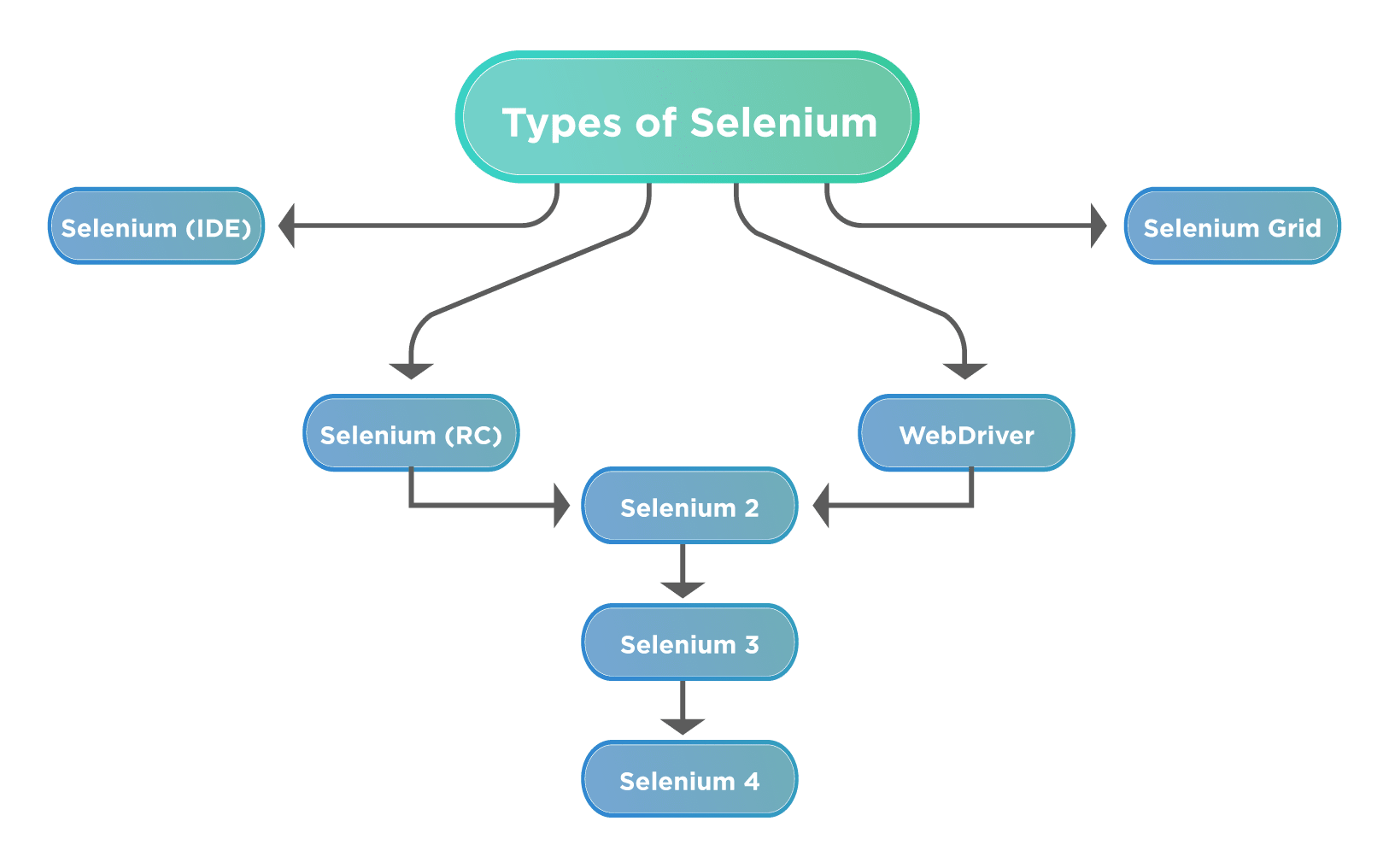 Let's understand all these components in more detail:

What is Selenium IDE?

Selenium IDE is an extension available for both Firefox and Chrome, which has the record and replay functionality available. Selenium IDE also now has the capability of exporting the code in various predefined languages. It also gives the ability to use one test case inside another.

What is Selenium RC?

Selenium RC is a server that acts as a middle man between the user and the browser that needs to interact. RC uses Javascript to work with browsers while allowing the users to write code in the language of their choice. It was the main version of Selenium for some time. Selenium RC had issues with the One Origin Policy and deprecated in favor of WebDriver.

What is Selenium WebDriver?

Selenium WebDriver is the most commonly used component of Selenium. WebDriver allows users to write custom code in their language of choice and interact with the browser of their choice, through browser-specific drivers. WebDriver works on the OS level and uses a Protocol called JSONWireProtocol to communicate with browsers.

Selenium 3 was an upgrade over Selenium 2 in many terms. Selenium 3 became a World Wide Web Consortium  (W3C) standard. Selenium RC moved to a legacy package, and many improvements and new features got added to cater to the changing web landscape.

Moreover, Selenium 4 is the new member of the family (selenium latest version) and still in the beta phase for the end-users.

What is Selenium Grid?

Selenium GRID allows users to run tests on different machines, with different browsers and OS simultaneously, which gives the ability to run tests in parallel, as such saving a lot of time and resources of testing on several machines.

Why is Selenium popular and What is selenium used for?

Selenium has become one of the most popular tools for automating web applications with a big community behind it supporting. Big multinational giants like Google, Apple, Amazon, and many other Fortune 500 companies use Selenium daily and have even provided support to the tool. The original Selenium contributors are still actively contributing continuously, which has enabled Selenium to be up to date with the challenges of modern web application testing.

Many of the top companies use LambdaTest for Cross Browser Testing along with Selenium.

Also, as we discussed, the Selenium suite of tools, which comprises different components like Selenium IDE, WebDriver, Grid, etc. are available for automation across different browsers, platforms, and programming languages. Selenium also supports all major operating systems like macOS, Windows, Linux, and has support for mobile operating systems like iOS, Android as well. The below figure shows a few of the standard feature which attributes to the popularity of Selenium: 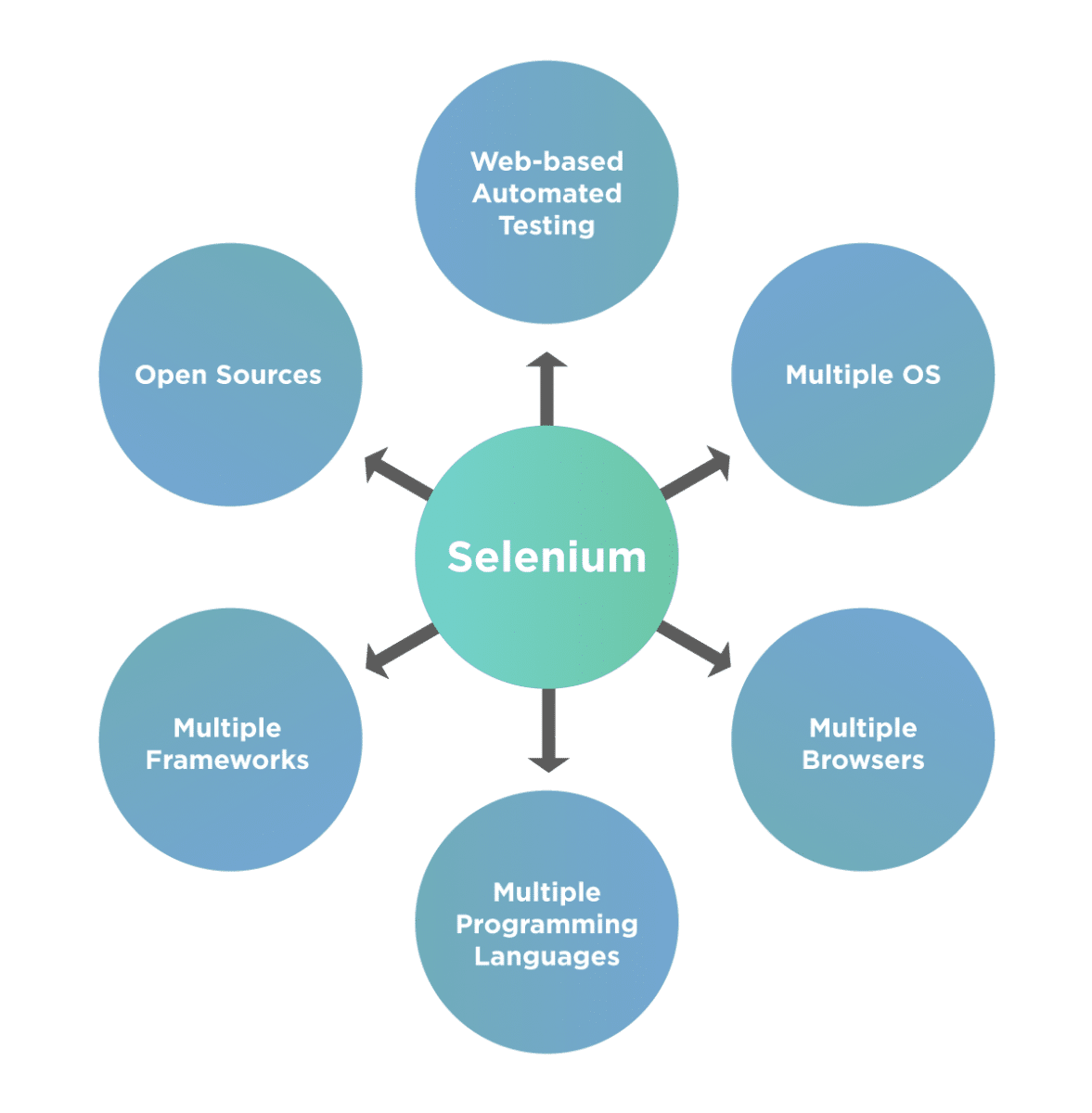 Apart from this horizon, let's understand what Selenium is capable of doing?

What Selenium can do?

There are a lot of capabilities that Selenium provides and which attributes for its being one of the most liked automation tools in the market. Let's take a quick sneak on those capabilities:

Apart from the capabilities, as mentioned above, as we discussed, Selenium supports a various range of web-browsers, programming languages, and operating systems. The following figure shows a few of them: 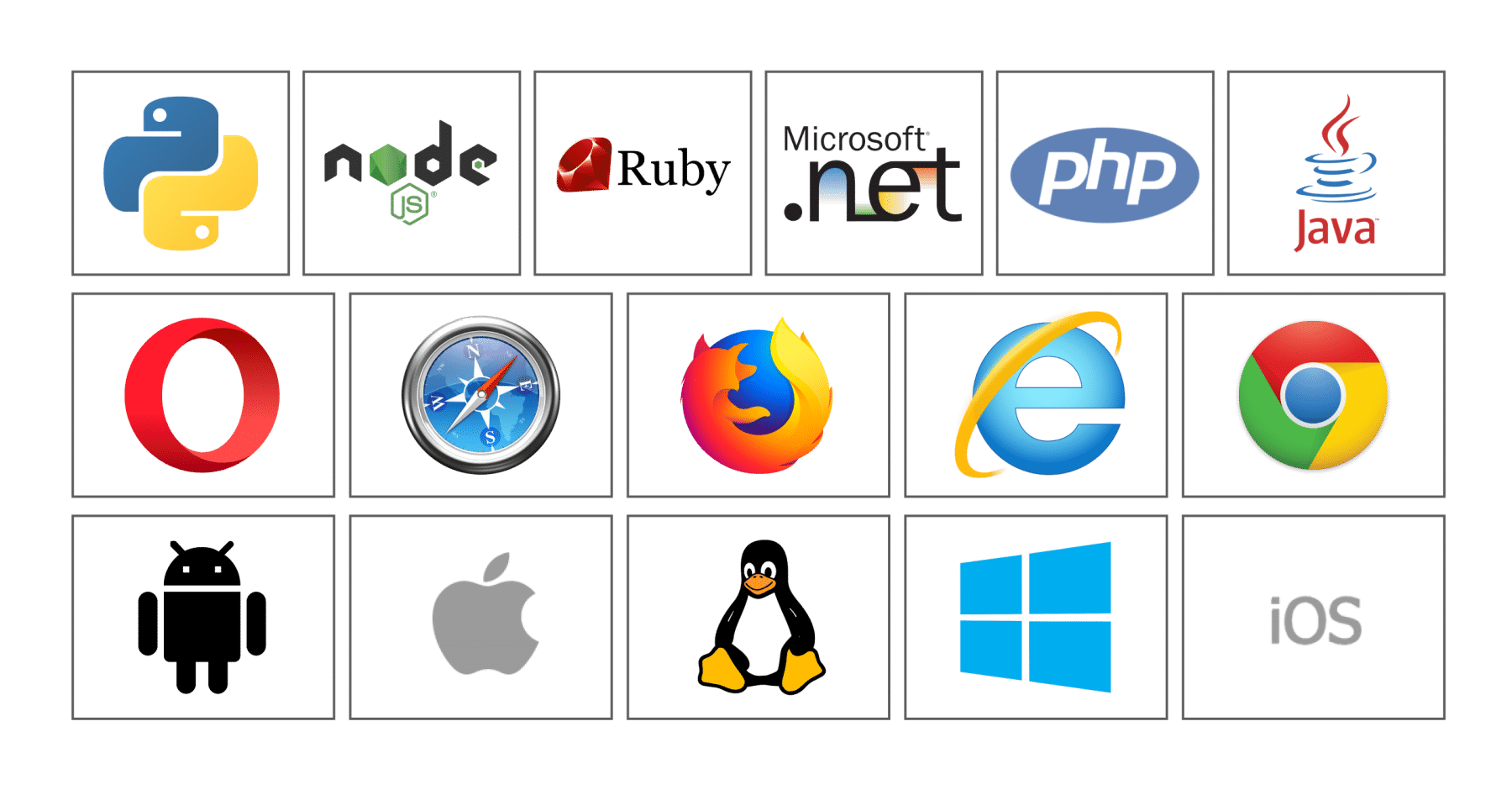 What Selenium can't do?

Although Selenium can help in automation of a lot of user actions, there are certain limitations to it also. Few of them are:

What are the prerequisites for learning Selenium?

Even though it's straightforward to learn and kickoff automation of web applications using Selenium, its always useful to ensure that the user knows the following concepts, before starting learning about Selenium:

However, it is not necessary to know of all these. ToolsQA has specially designed their Selenium tutorial that a novice can pick up and learn automation quickly. With these Selenium WebDriver tutorials, you should be able to start your journey of Selenium testing. In fact, if you like to be called Selenium Professional we recommend you take the Selenium Certification as well.

Now before jumping to the usage of the Selenium suite, the first confusion that comes is which Selenium tool needs to use for which type of scenarios. Let's understand a few of the situations where a particular Selenium tool will fit the needs:

Since there are multiple components of Selenium, it may be confusing for people who are new to Selenium to decide which part to use for their automation needs. You can use the below guide to select which Selenium component will fit your need the best:

By now, we all should be clear about the basics of Selenium testing. Let's move to the next article, where we will learn about the details of "Selenium WebDriver".