What is Git Fork and How to Fork a Repository in GitHub?

Lakshay Sharma
Previous Lesson
Connect Local Repository with GitHub Remote Repository
Next Lesson
What is Git Clone & How to Clone a Repository?

Through the course of these tutorials, we have got an account on GitHub and linked a local repository with a GitHub repository. Doing this gives us the freedom of using amazing GitHub features. While we have started to combine Git with GitHub, we will throw some light on how to copy someone else's repository into our account (Forking in Git using Git Fork). The reason being simple and straightforward for this action, to make the changes or use the repository for our own purpose.

In other words, in this tutorial, we will see the perspective of a person who wishes to contribute to a public repository (or a private permitted repository). This term or the process is called git forking about which this post is all about.

Sounds exciting? To sum this up, in this tutorial, we will go around the following topics:

What is Git Fork and Forking in Git?

A fork is a copy of a repository. Forking a repository allows to freely experiment with changes without affecting the original project.

Confused? let me try again. Forking in GitHub is the process of creating a copy of a complete repository to the user's GitHub Account from another account. When a user forks a repository, all the files in the repository are automatically copied to the user's account on GitHub and it feels like the user's own repository. This process is similar to copying a folder from one drive to another drive on a computer. The user is then free to use this repository either for their purpose or experiment with changes in the code. Through git forking, the users can develop their own modifications to the code that belongs to someone else.

To be noted, that this process does not have any effect on the original repository (also called an upstream repository) code. 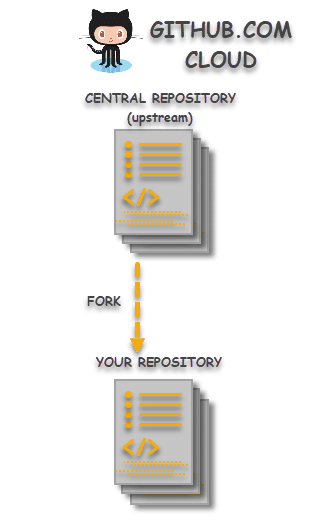 Git forking through GitHub is a process that is isolated to GitHub. This means that whenever a git fork happens, the repository and the code remain confined to the user's GitHub account. There is no effect on the local machine of the user or the involvement of Git in the process.

Why Fork a Repository on GitHub?

Forking a GitHub repository provides an individual with a copy of the upstream repository to their account. But why would we need to fork a repository which is developed by someone else? The answer to this question is in the concept of GitHub itself. GitHub was developed to provide a platform to all the developers around the world so that they can contribute to each other's projects and make better, more reliable software. It is obvious no one would want to see hundreds of changes without their consent on the original repository. Hence, the concept of a copy of the repository or a forked repository comes into the picture.

Forking a repository on GitHub is done for two main purposes:

How does Forking (Git Fork) work?

Git Fork is a simple process in GitHub and it does not require to use any git command. The process of Git Fork follows the below steps: 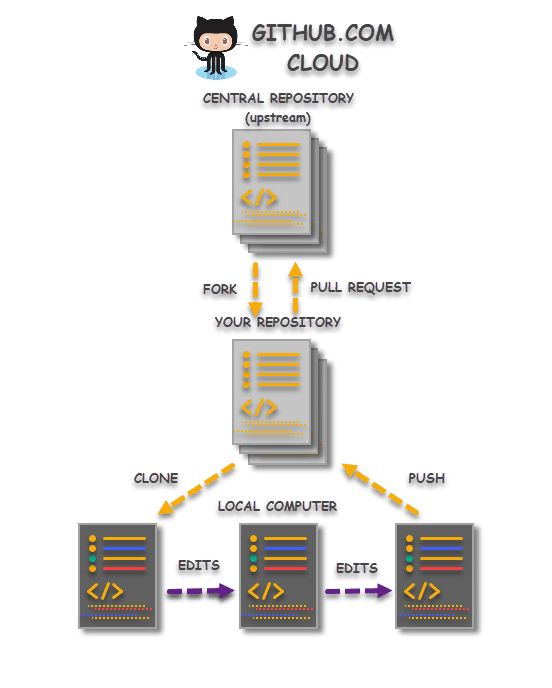 Alright then, I hope it is clear about the concept of forking a repository on GitHub. It is time we see how to do that.

In this section, we will see how to fork a GitHub repository. A user can fork any public repository and add it to their own account. But, for simplicity, we will be forking a small repository that I created on my another account.

How to Fork a Repository on GitHub?

To fork one of my repositories on GitHub for practice, Login to your account.

Now, my account name (from which we will fork the repo) is harishrajora while the repository name is ToolsQA. You can use any one of the following parameters or both of them to search for the repository.

If you are using the name as a parameter, type the name in the search bar. Press All GitHub after entering the name to search everywhere in GitHub.

A message will appear telling there is no repository by this name.

This is because if you look at the left column of the page, Repositories is selected on that by default. Since there is no repository by the name harishrajora, it showed that message. We know that harishrajora is a user name, so, select Users in the list. 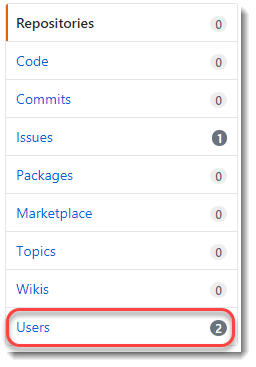 The number in front of users denotes there are two users available by that name. Select the first one with the name harishrajora only.

If you are using the name+repository as the search parameter, then type the following in the search bar and press All GitHub. 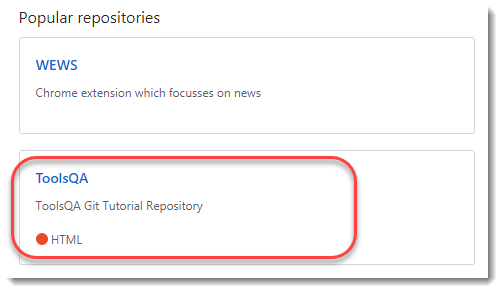 The repository ToolsQA will be forked to your account instantly. This can be seen by your username after forking the repository.

Now that you have a copy of the repository using git fork, you can modify and improve the code according to yourself. There will also be cases when you would want to delete the forked repository. The next section will help you out in this regard.

How To Delete A Forked Repository?

Fortunately, this is a very simple process. Just keep in mind not to delete the repository until the changes have been merged into the original repository or the user is too sure about deleting the repository since after deleting, you will lose all the changes. 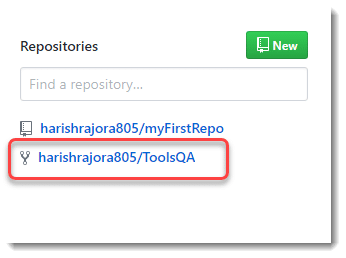 1.On the repository page, go to Settings located on the top row. 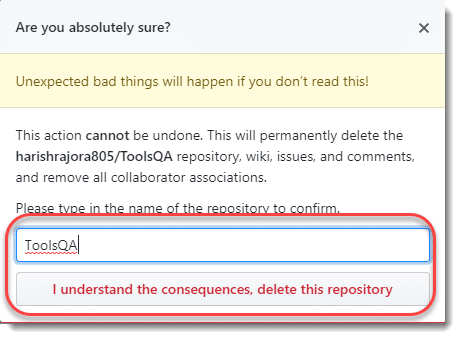 GitHub's heart is Git repositories. It is meant to share them all across the world. Forking a repository in GitHub is one of the most common actions on GitHub. How will you contribute if you won't fork the original repository onto your account? Forking the repository and deleting it is an easy process and I hope you got the understanding it.

Now it may seem that git fork and git clone are the same things, they are not. You might hear people sometimes get confused over these two things. But no developer working on GitHub will get confused because they have their own importance and differences. This we will learn in our next tutorial about cloning and how it differs from forking. 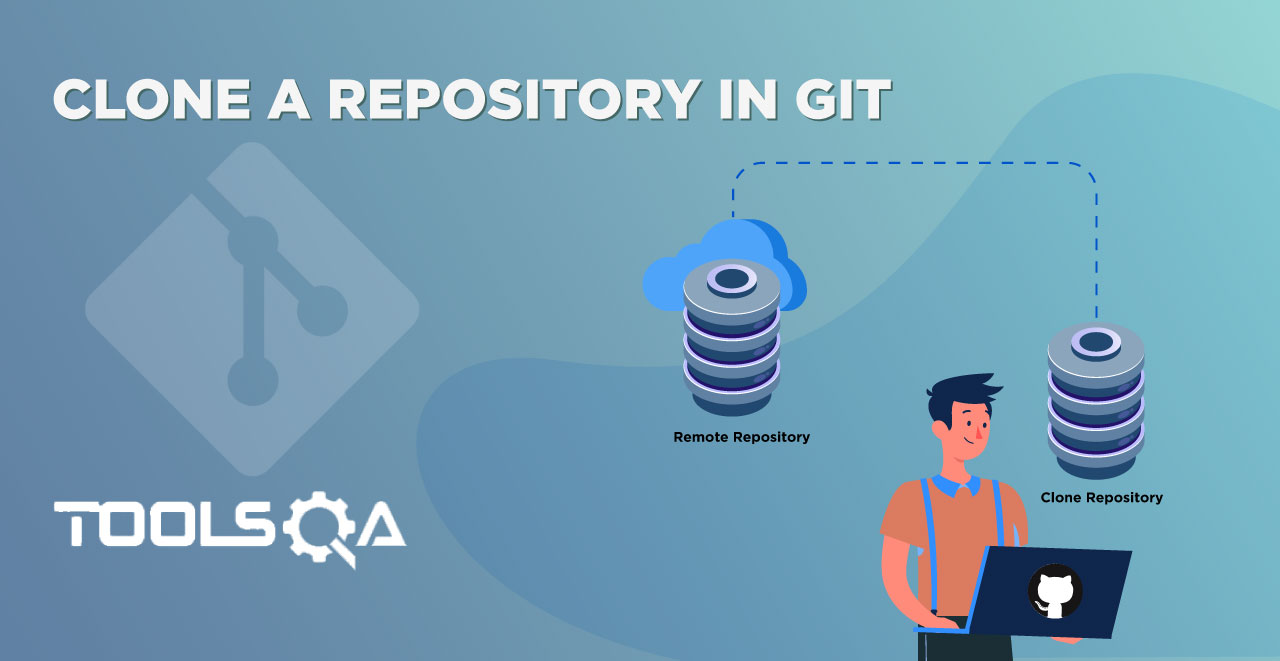 What is Git Clone & How to Clone a Repository?
Next Article