What is Docker Networking?

It can be defined as a communication package that allows isolated Docker containers to communicate with one another to perform required actions or tasks.

A Docker Network typically has features or goals shown below:

We have a model named "Container Network Model (CNM)", which supports all the above features. Let's understand the details of this in the following section:

What is a Container Network Model (CNM)?

Container Network Model (CNM) uses multiple network drivers to provide networking for containers. The CNM standardizes the steps required to provide this networking. CNM stores the network configuration in a distributed key-value store such as a console.

CNM architecture is shown below: 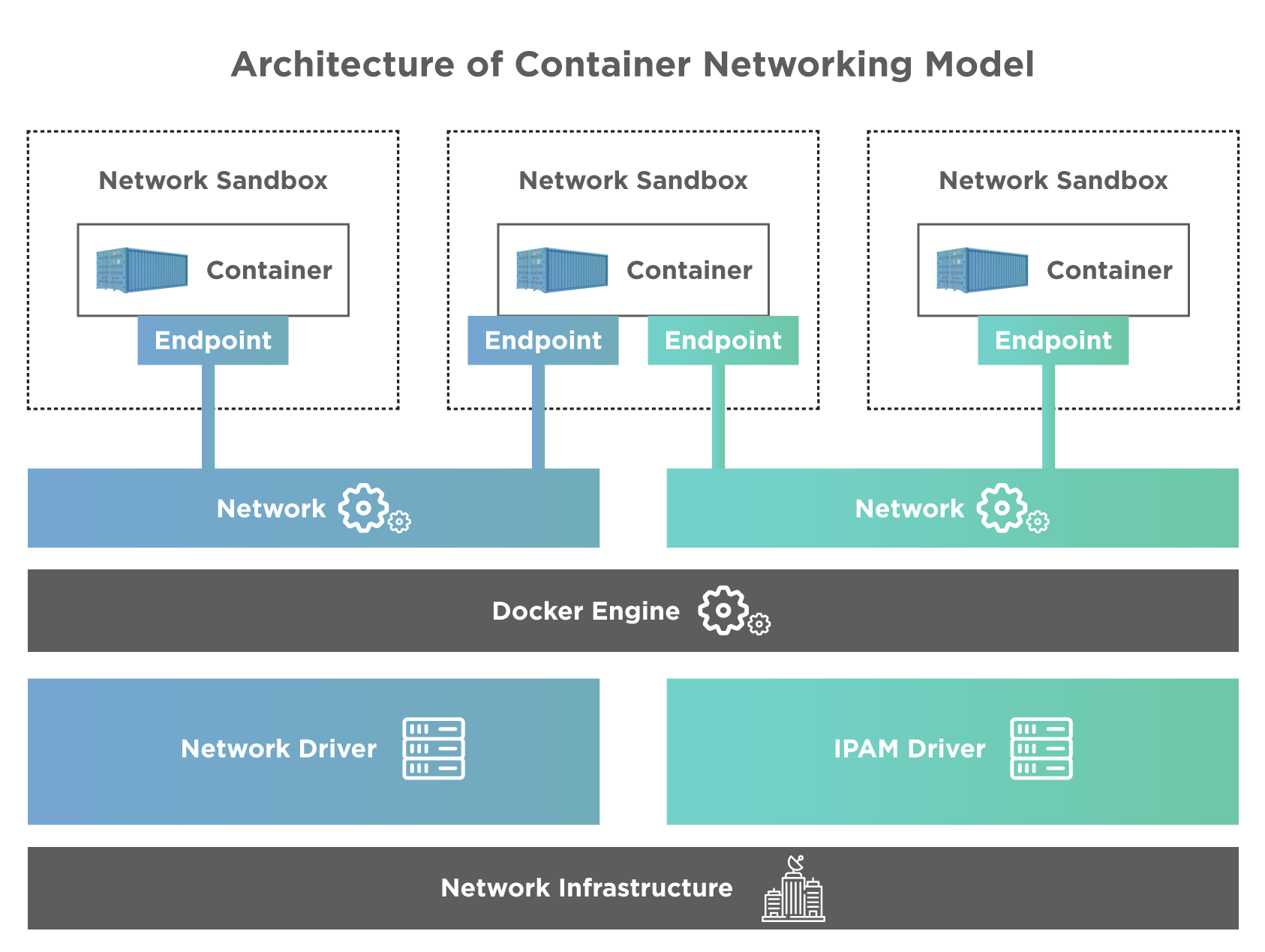 The above diagram also shows 5 main objects of CNM. Let us discuss these objects one by one.

With this basic knowledge, we will now move ahead with the types of network drivers supported in it.

What are various Network Drivers in it?

Docker supports various network drivers that make networking easier. Docker creates a private internal network on the host. A typical communication of the containers on a host machine is shown as below: 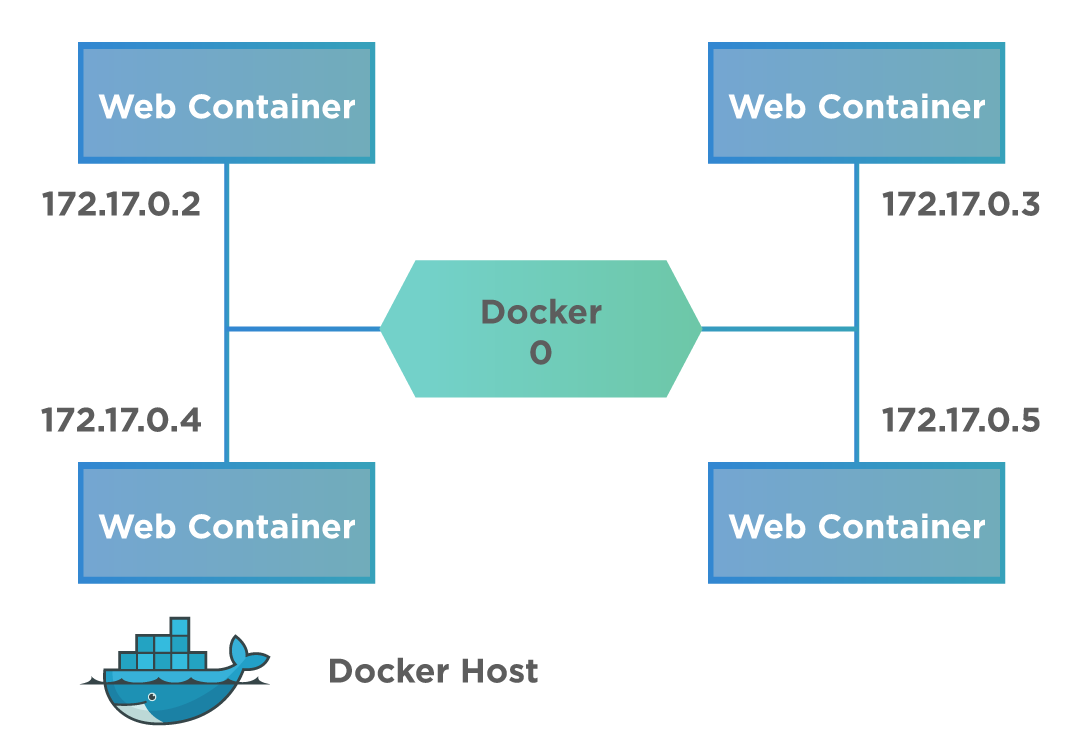 We can create a bridge network using the docker network create command as follows:

When we execute the above command, it returns an id that identified the bridge network we just created. For example, this is shown in the screenshot below.

As seen from the above screenshot, we specify the type of network (bridge in this case indicated by a red circle) in the command. Then command returns the id for the network created (yellow rectangle), indicating successful execution of the command.

When the network driver is 'None', the containers are not attached or associated with any network. The containers also do not have access to any other container or external network. The following diagram shows a Docker host with a 'None' network. 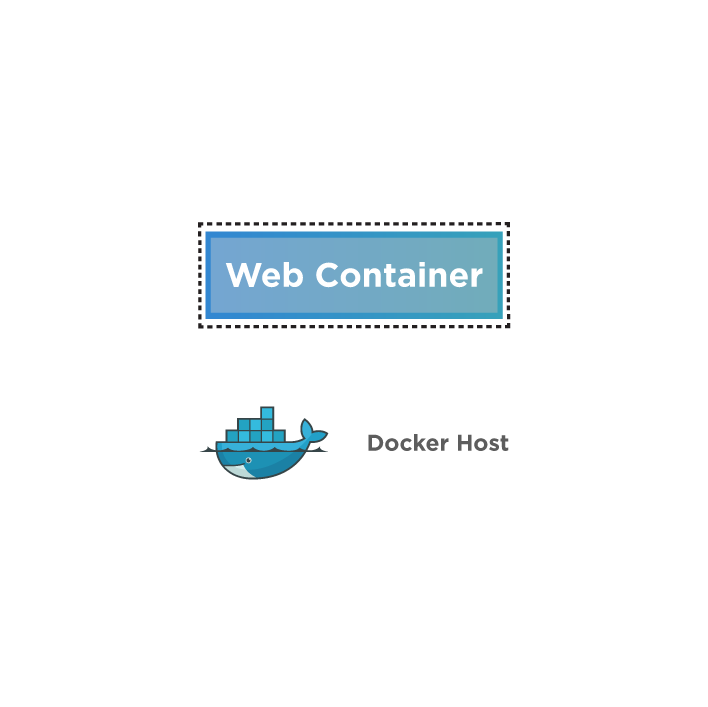 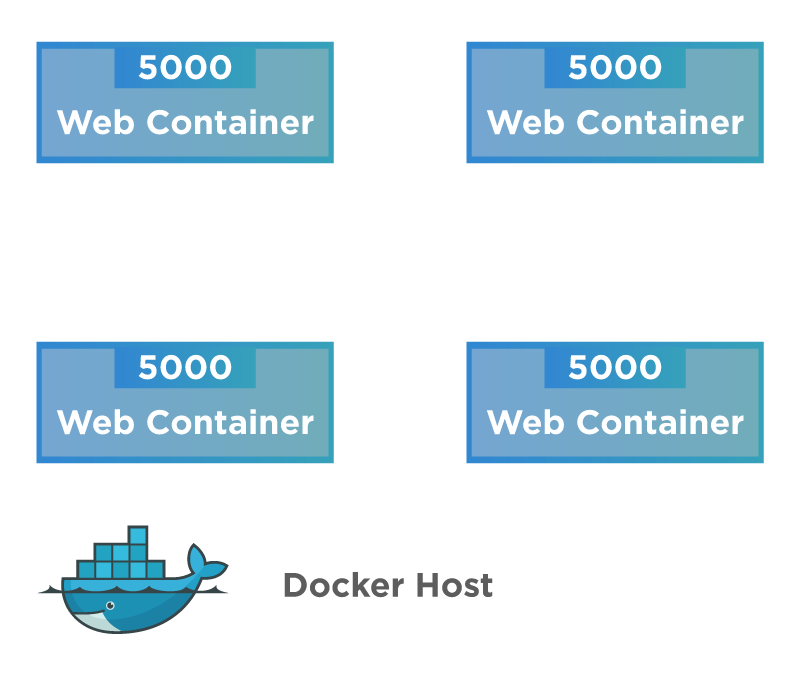 From the above diagram, we can see that containers can directly use the host's networking once this isolation is removed. However, we cannot run multiple web containers on the same host or the same port in a host network because now the port is common to all containers in the host network.

An overlay network creates an internal private network spanning across all the nodes in the swarm cluster, thus facilitating the communication between swarm service and a standalone container or even between two containers present on different Docker Daemons. In other words, the Overlay network connects/ links multiple Docker Daemons and enables Swarm services to communicate with each other. We can refer to Networking with Overlay networks for more details.

Macvlan driver is supposedly the best choice when we directly connect to the physical network instead of routing through the Docker Host's network stack. 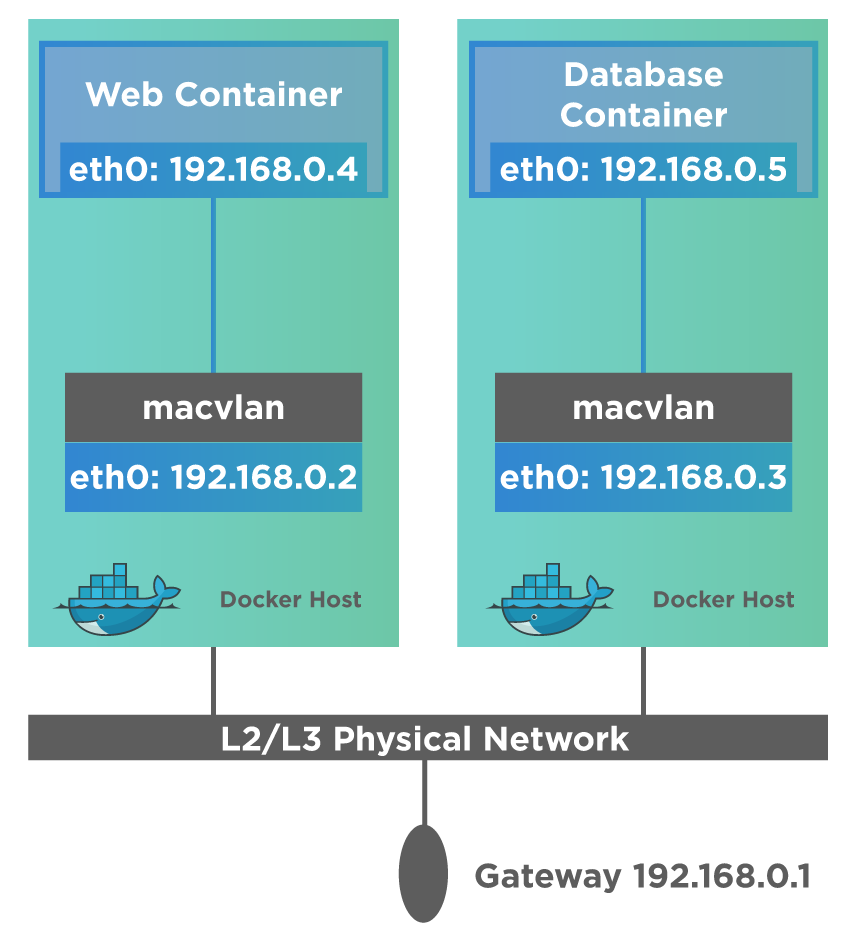 Docker containers communicate with one another as well as with Docker Host so that they can share information, data as well as provide effective services and overall help in the smooth running of applications. This is made possible by Networking for Docker. In fact, Docker creates an Ethernet Adapter when it is installed on the host. So, when we executed the 'ifconfig' command on the Docker host, we can see these Ethernet Adapter details. This Ethernet Adapter takes care of all the networking aspects for Docker.

The execution of ifconfig on the Docker host produces the following output. 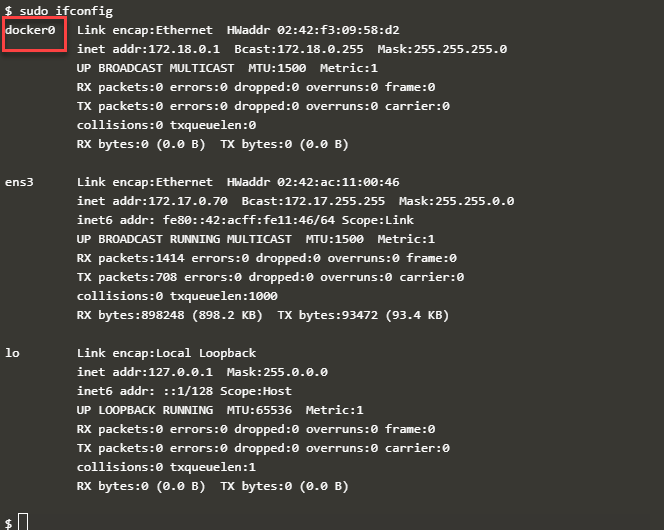 The above screenshot shows the Ethernet Adapter 'docker0' on the docker host. Let us now discuss the basic networking commands used in Docker.

The 'docker network ls' command has the following syntax:

This command produces the following output when executed.

As shown in the above screenshot, the 'docker network ls' command lists all the networks associated with the Docker on the Docker host. This command does not take any arguments.

The command 'docker network inspect' allows us to see more details about a particular network associated with the Docker. The general/ typical syntax of this command is as follows:

Here networkname is the name of the network we need to inspect.

The command 'docker network inspect' returns the details of the network whose name is specified as the argument to the command.

For example, the command

will produce the following output. 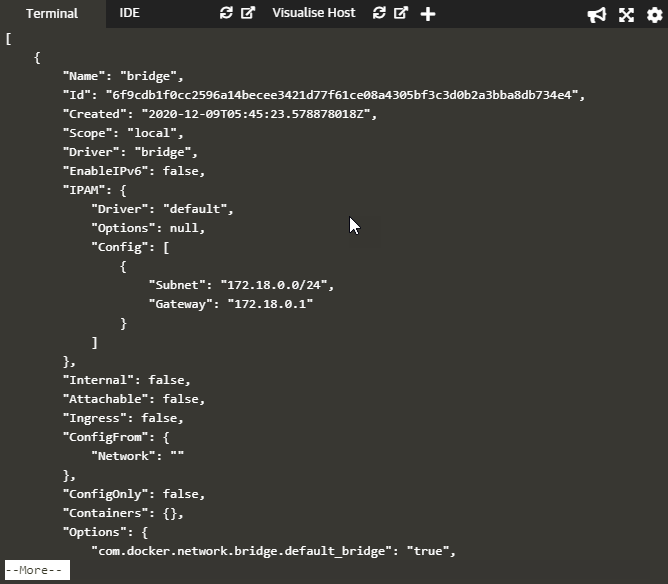 As shown, this command generates the details of the bridge network, which is the default network present on the Docker host.

We can also create our network in Docker. This is done using the command "docker network create". This command has the following general syntax:

Here, "drivername" is the name of the network driver used.

"name" is the name of the network newly created.

A new network specified by the 'name' is created on the execution of this command, and a long ID for the network is returned.

On execution, this command generates the following output.

How to connect the docker container to the network?

Once we create a new network, we will need to attach or connect the docker container to this new network. This is done by specifying the 'net' option with the 'docker run' command. Next, we specify the network's name to which this container should be attached as a value for the net option.

Let us execute the following command.

The above command will attach the container 'training/postgres' to the network 'my_bridge_nw'.

The output of the command is shown below.

We can see the container is attached to the network now. To verify this, we now inspect the network "my_bridge_nw" as follows:

The above screenshot shows the container attached to the network (indicated by the red rectangle).

How to use the host networking in docker?

We can directly bind the Docker container to the host network without network isolation. This gives the feel of running the process directly on the Docker host without the container. And in all other ways like process and user namespace, storage, etc., the process isolates from the host.

Let us execute the following command.

Using this command, we start the container as a detached process. The option 'rm' in the above command removes the container once it stops/exits. Likewise, the '-d' option starts the container in the background (detached).

The output/ result of the above command is as below:

So here we create a new detached container nginx. Now to verify the creation, we can execute the following command.

The output of this command shows that the container started in the above command is, in fact, running.

The above running container (shown in red rectangle) can stop using the stop command of docker as shown below.

The output of the command is as below.

In the above screenshot, we have stopped the running container nginx using the above command. Once the container is stopped, it will remove automatically since it started with the -rm option.

In the above YAML file, we define a 'default' entry under 'networks'. This specifies that the containers should use this default network for networking.

We can also specify our own networks with the network key and even create more complex topologies, network drivers, etc. We can even use it to connect to external services not managed by Docker Compose. When we have multiple services, each service specified which network to connect to.

Consider the following  YAML file as an example of multiple hosts and also multiple custom networks.

If we want to access any pre-existing networks, we should use the 'external' option below.

So, in this case, Docker Compose will connect the containers to the 'pre-existing-nw' network and not to a default network.