A container registry in docker is a single/ only place where we can find docker images, manage docker images, perform vulnerability analysis and decide on the access control. Furthermore, using CI/CD, we can have fully automated Docker pipelines for faster feedback. In this article, we will discuss Container registries in Docker with the following topics:

When using Docker, we create an app or service and then continue to pack it, including all its dependencies and/or configuration, into a container image. Additionally, we can view an image as a static representation of the app/service, configuration, and dependencies. Finally, the image needs to instantiate to create a container that runs on the Docker host to run this app/ service.

There can be numerous images that are not easy to handle, and therefore we should be able to store these images somewhere, preferably in a registry. Moreover, this registry acts as a library of images and is needed when we deploy the images to production. Docker maintains an official library of images via Docker Hub, which is a public registry. Additionally, there can be numerous private registries as well at the organizational level and many different public registries.

The below diagram shows this arrangement: 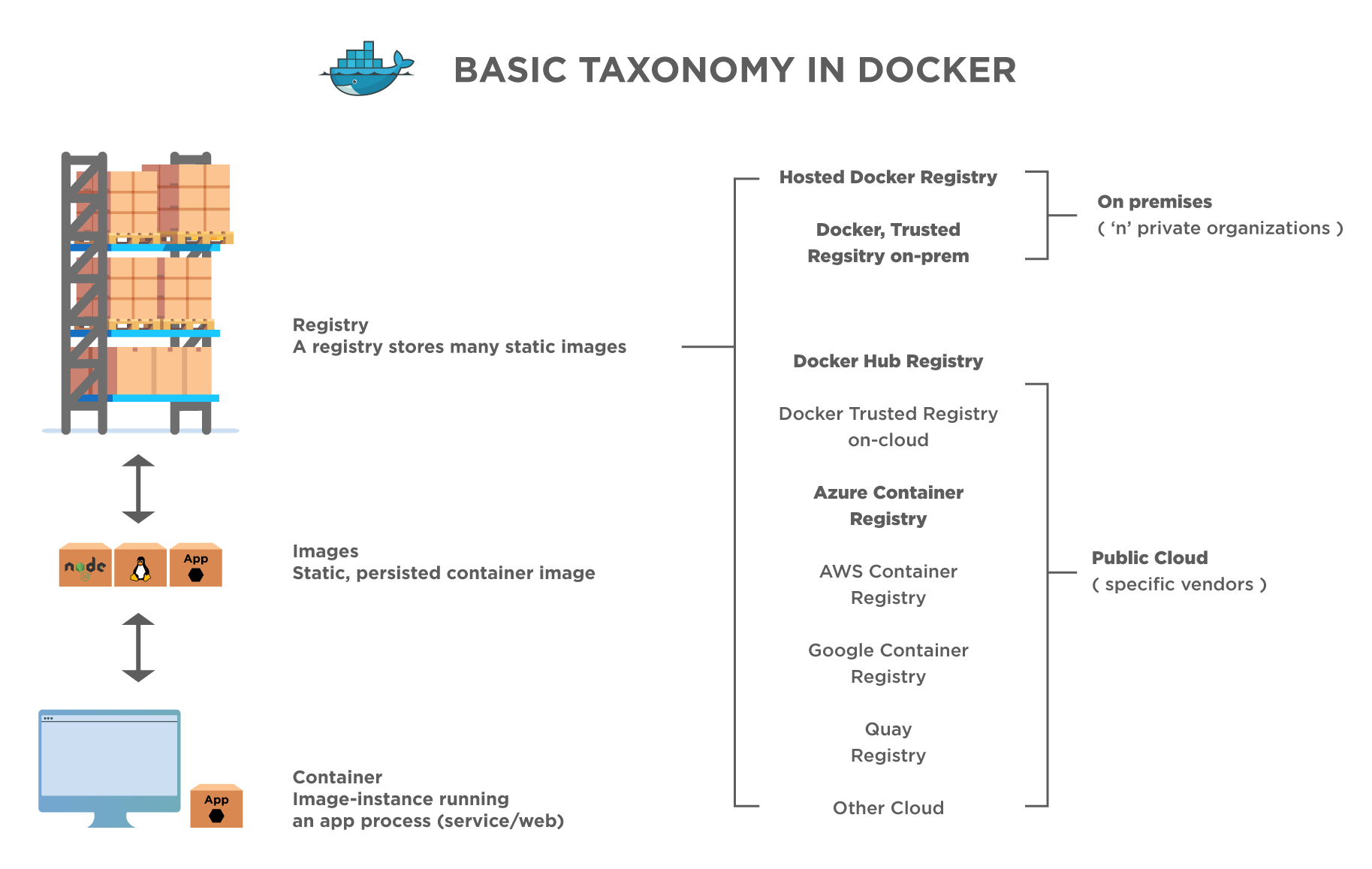 As shown above, the image shows the Docker registry distribution. The docker container, which is a running instance of the image, accesses the image from the registry. This registry can be on-premise (private at the organizational level) or on a public cloud. Putting the Docker images in the registry lets us store static and immutable application versions that will include dependencies and configuration at the framework level. These images are versioned, and one can deploy them in multiple environments as deployment units.

We can view the registry as a bookshelf where the number of images is stored and can be pulled for building containers that can run services, web apps, etc.

Let us now move onto the details of the container registry.

What is a container registry?

A Docker/container registry can further organize into Docker repositories. A Docker repository holds/ consists of all the versions of a particular image. The Docker registry allows us to pull images as needed and also push new images into it with proper permissions.

As we have seen in our previous tutorials on Docker many times, the Docker Engine, by default, interacts with the DockerHub, which is Docker's public registry, as already mentioned. We can also run an on-premise Docker registry/distribution, which is open-source and commercially available and is called Docker Trusted Registry.

If we want to pull an image from DockerHub with the name myimage/Hello, we can execute the following command:

It will pull the latest version of the above image locally from DockerHub.

To pull the same image from an on-premise registry, we need to run a command specifying the location of the registry, port, name, and tag of the image, etc., as shown in the following command.

We have specified that we need to pull the image version of myimage/Hello with tag 1.1 from my-docregistry at port 9000.

So now we can see the difference between the way we pull an image from public and private registries.

We recommend using Private registries (on-premise or cloud) when the following cases are true:

In the above cases, it is advantageous to go for private Docker registries.

Why use the Container/Docker registry?

We can justify ourselves with the following points.

How to deploy a Docker Registry server?

A "registry" is an instance of a "registry" image, and it runs inside the Docker. So before we can deploy a registry, we need to have Docker installed on the host. Let us follow the sequence of steps to deploy and configure a registry server.

The registry container is now ready to use.

Copy an image from Docker Hub to your registry

Next, we pull the image from Docker Hub. For example, let us pull an image "ubuntu" with version "16.04" from DockerHub using the following command.

Then we re-tag it as "my-ubuntu-image" and then push it to the local registry container. For this, we use the following command.

The following screenshot shows/ displays the execution of the above commands. 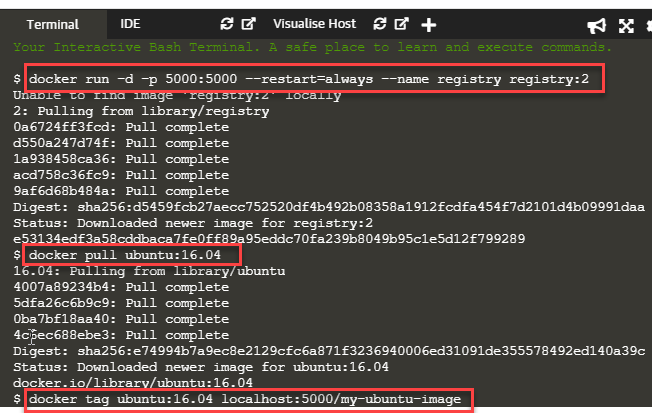 The below screenshot shows the execution of the above commands. 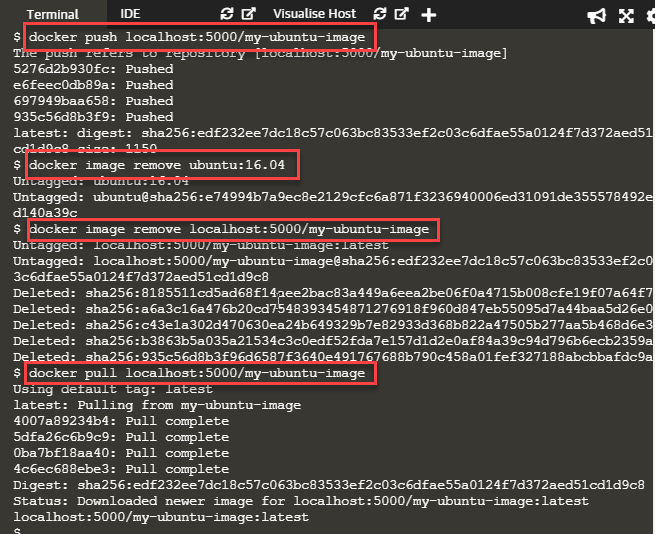 We can stop the local registry using the "docker container stop" command as follows:

Now we move on to the basic configuration of the container. For example, if we need the registry to be part of the permanent infrastructure, we could set it to restart automatically when Docker restarts or exits. In the following command, we use the "--restart always" flag for this. The command for this is as below.

As shown in the above screenshot, we can verify that the registry container has started by checking the status of the container.

Customize the published port in the Docker registry

We can also customize the port used for publishing. If port 5000 is already in use or if we want to run multiple local registries on different ports, we can customize the published port—for example, the following command.

We can also use the environment variable "REGISTRY_HTTP_ADDR" to change the port the registry listens on, as shown below:

This way, we can deploy the registry container on a Docker host.

Anyone running Docker can access the public repository using Docker API. For example, "docker pull ubuntu" will pull the 'ubuntu' image with the "latest" tag. On the other hand, private repositories restrict access to the repository creator or only to members of the organization. DockerHub also supports official repositories. These include images like "Nginx" verified for security and also use best practices.

We can link the DockerHub repository to the source control repository that contains the build context and perform automated image builds. A commit triggered in the source repository will, in turn, trigger a build in DockerHub.

Another feature of DockerHub is that it automatically scans the images in private repositories for any vulnerabilities and produces a detailed report of them.

Other Public container registries from AWS, Azure, and Google

Following are some of the differences between the two:

Conclusively, with this article, we have completed our series on Docker. Happy learning!!