The other day, someone asked me if I were stranded on a desert island and could take only one data structure with me, what would I choose?

Without a second thought, I said Hash Tables.

But, hey, at least we share the same spirit and obviously the same answer.

Curious why we chose this structure? Read along.

When we spoke about arrays, we’ve used a numeric index to access our element. But, with hash tables, we widen our option and use meaningful keys to add or access each element.

Let’s take a small example to discover hidden meaning in above sentences.

Assume we want to store the names of few states in India. A simple array of strings can easily accomplish this task.

With each element of the array, came its own index number. This indexed superpower of arrays helped us access each element independently. 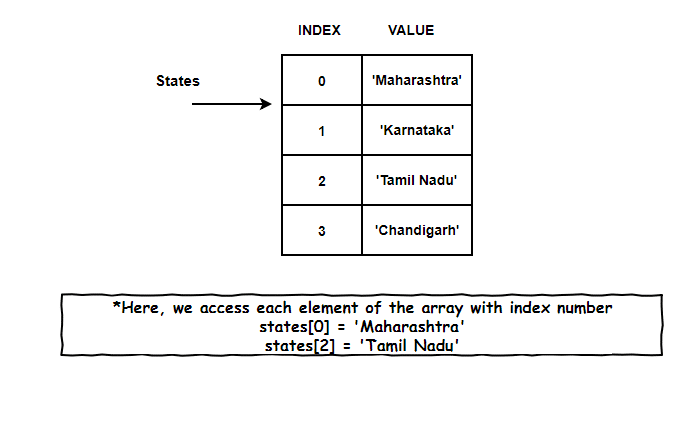 But, have you ever wondered what’s with these boring index numbers. Why can’t I replace them with Marvel superheroes name? Or something more meaningful which can establish a relationship between the index of an array and its element.

Boring Index numbers out, meaningful Abbreviations a.k.a Keys in. 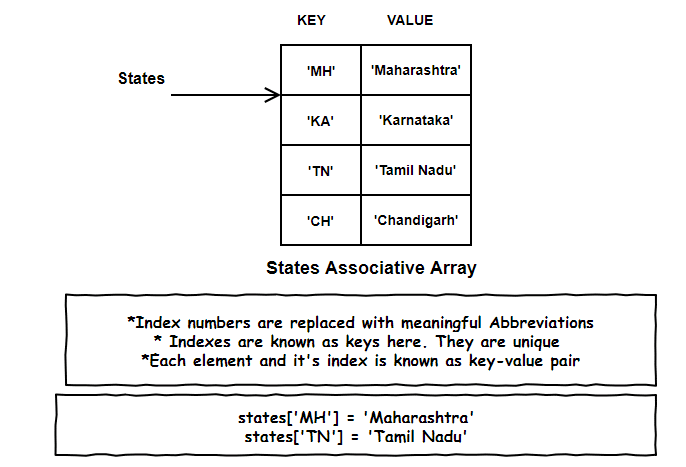 This kind of meaningful indexed array is known as an Associative array. Remember those boring index nos, they are re-branded as keys here.

So, each element and its respective index is known as a key-value pair. And just like array indexes, keys in associative array needs to be unique.

The practical implementation of associative arrays has different names in different programming languages. In some languages, they are called a dictionary. Or Maps. Or Hash. I know at these moment many questions would have raised in your mind like:

Associative arrays or Maps or Dictionaries are implemented using Hash Tables. So, we are so on the same topic.

Now, for question No 1, we will have to revisit our problems faced by our beloved array in the previous article and see how hash tables solves them.

Let’s say we’ve have a simple one-dimensional array and we want to find if our array has string ‘Sam’ in it.

We’ve to perform a linear search on our array i.e visiting each and every single element of an array to see if string ‘Sam’ exists.

But, what if the array is holding thousands of data?

The time taken to search is directly related to how many data we have which is linear time or O(n).

Sure, we can perform sorting and try to get down the complexity to O(log n), but we also know sorting is computing intensive.

But, remember, there are always two doors, one to hell and other to heaven.

But, what if some angel falls from the sky and tells you, “Ah, the string ‘Sam’ is located at array index 2.

Just by knowing the index, the size of the array and the position of the element in the array doesn’t matter even if we’ve thousands of data.

But, the ultimate question to be answered now: how do we know or calculate where our element resides.

Hash Tables To the Rescue.

What are Hash Tables in Data Structures?

Hash tables are made up of two distinct parts:

Now we know internally hash table will use an array to store them. But, before storing the values directly in the array, we will pass this string one by one to the hash function.

What is Hash Function?

Think of term hash as used in cooking like a hash brown. We take raw ingredients, chop them and mix them all together. Our raw ingredients are data like strings in our example or something like a password or maybe an entire object. All we do is add this data to a hash function.

This hash function, in simplest term, will grind all data up and give us a simple and very smaller integer number.

There are few things that should be noted about hashing here:

Now coming back to our example, the hash function will take a string value and gives us back an integer number based on some calculation.

This integer number is where we insert/add the value in the array.

Below is an example how Hash function calculates integer number for all strings we want to store in the array. 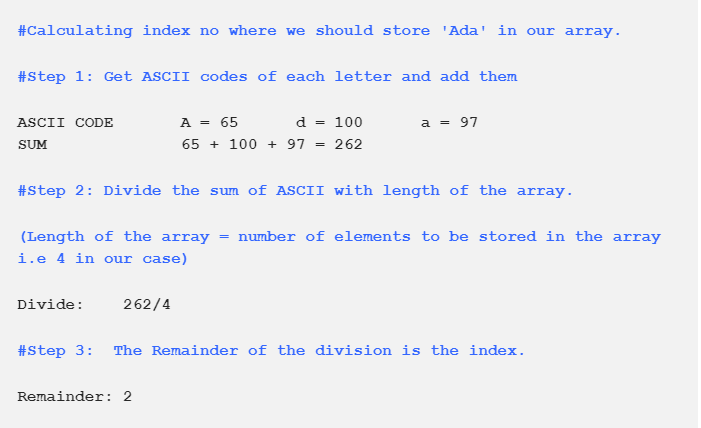 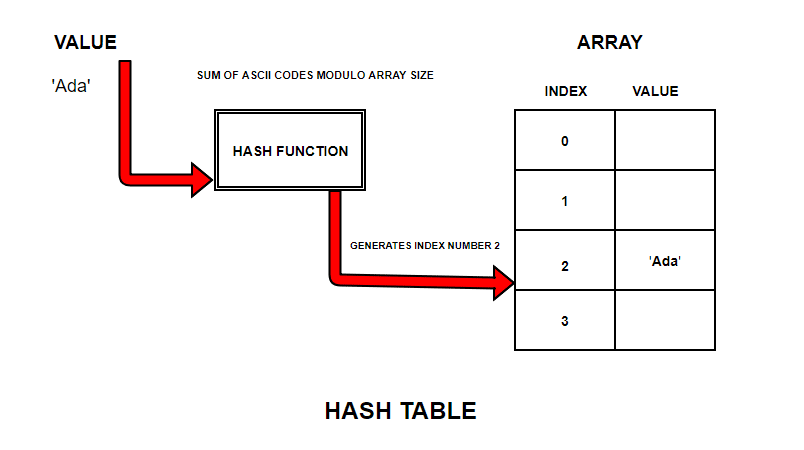 Now, let us try to store all the strings using the same calculation into the Hash table. 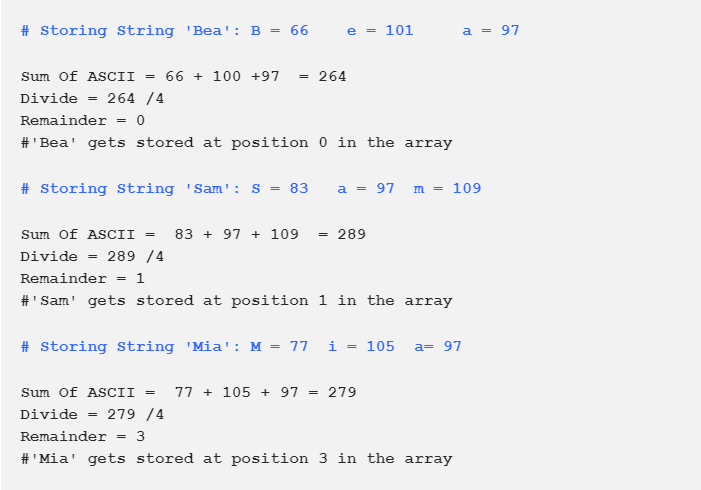 The array is fully populated now. But, this time based on index numbers given by a calculation. 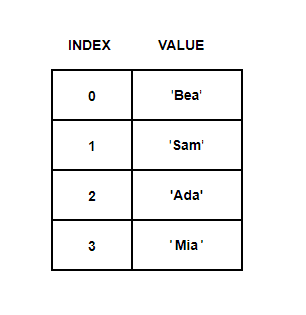 Retrieving String From the Hash Table:

Now, let’s try to retrieve string ‘Sam’ from this array.

1: Sum of ASCII code of each character

And just like that, the remainder just gave an array index. We just found our angel which will always tell us what our index number is.

Thanks to Hash tables, the complexity of searching an element drops to O(1).

Just like our above example, the associative array uses a hash function too

But, the index number of an array is generated by ‘keys’. Let’s see how this below key-value pair gets stored in the hash table. 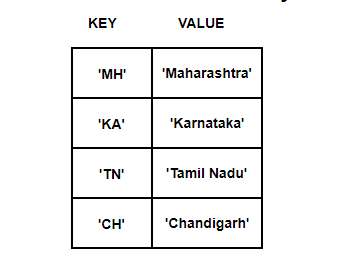 Here, keys like ‘MH’ are given to hash function to generate array integers. 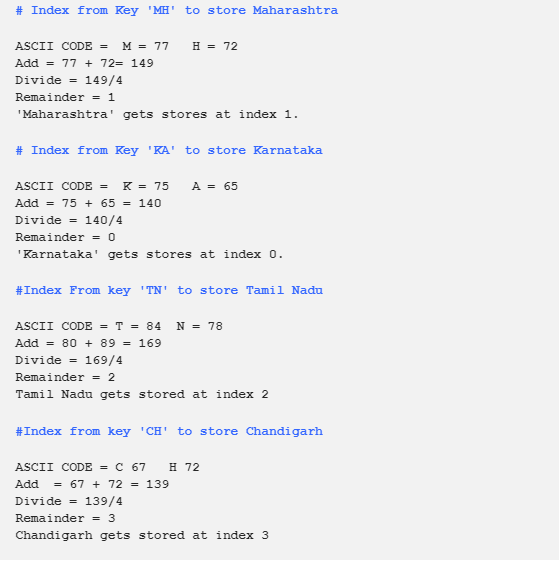 The above things happen in fairy tales or if it belongs to Happily-ever after Bollywood movie.

But, real life is not fair. 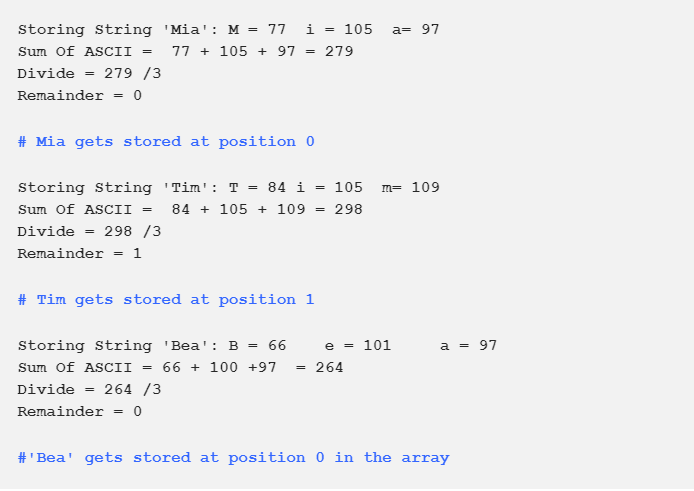 Wait, don’t we already have String ‘Mia’ at array position 0. How can we put ‘Bea’ in the same position?

The keys have collided. Something we call as hashing collisions.

There are many ways in which we can solve this collision thing-y.

An extremely simple solution. If the position of an array is occupied, always love thy neighbor i.e try to put the element in next position.

But, our string ‘Tim’ already occupies position 1. Now what? Love Thy Neighbors Neighbor. Try position no 2.

Phew! We finally found an unoccupied spot. We can store ‘Bea’ here.

Placing an item in an unoccupied position of an array in case of collision is known as open addressing.

Let’s say we want to find string ‘Bea’ in our Hash Table.

According to our index calculation, ‘Bea’ should’ve been at position 0. But, thanks to collisions, it had to take up a slot at position 3.

So, to search string ‘Bea’, we first go to the index calculated by the hash function, check if the element exists and if not, perform a linear search to see where the element resides.

We were only dealing with 3 elements and we encountered a collision.

Imagine when we’re dealing with thousands of data, what will happen?

One way we can deal with this make the hash table bigger than needed to total amount of data we’re expecting. Something like only 70% of our hash table is ever occupied.

The ratio between the number of items stored to the size of the array is known as load factor.

Remember, when we were talking about arrays, we studied about a special type of arrays known as dynamic or re-sizable arrays.

If we’re implementing Hash tables with the dynamic arrays, it can be made to resize automatically if the above load factor reaches some threshold.

In Fairy Tale, all the elements are stored in their respective indexes without any collision. This best case scenario gives us O(1) complexity.

But, in worst case scenario, we’re still looking at O(n) complexity where collisions force us to perform a linear search.

There’s another way to deal with the collision which is known as Separate chaining. Let’s try to populate our hash table again with Strings {“Mia”, “Tim”, “Bea”}.

If we calculate the index based on our sum of ASCII codes modulo array size, we get index as zero.

But, instead of storing string ‘Mia’ at position 0, we have got a pointer to the first node at the linked list. 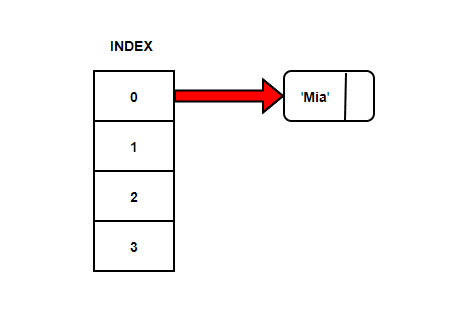 We’re going to study about the linked list in great detail soon but for now, think of it as a bunch of nodes that point to each other in one direction. An example would be that node A points to B and B points C.

Now, let’s try to store string ‘Tim’ with same calculation, the index comes out to be 1.

Again a pointer to a linked list from position 1.

Let’s try to store string ‘Bea’ now. The index number calculated is 0.  So, ‘Bea’ is added to the linked list at position 0 and Node ‘Mia’ points to it. 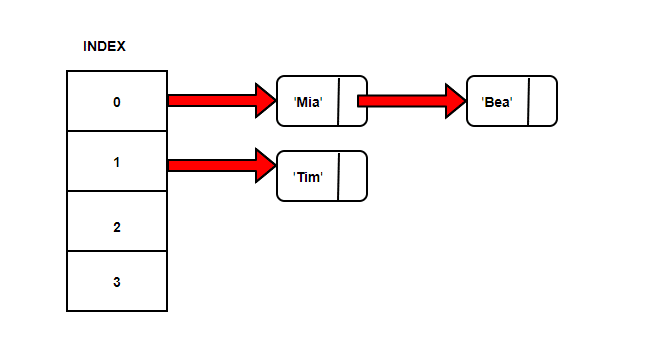 Let’s say we want to find string ‘Bea’ in our Hash Table.

Our index calculation tells ‘Bea’ should’ve been at position 0. We reach position 0 and then follow simple linked list traversal to find ‘Bea’.

At least with this technique, the index numbers where we store element given by hash functions remain unchanged. So the searching or lookup of an element is faster.

So, what do we do? Hash tables were supposed to solve our beloved array search problem. We are still looking at O(n) complexity in most cases.

The power is all in the function:

You want a powerful hash table, all you need is a good hash function.

The hash function we used above, that is the sum of ASCII codes modulo array size was a bad one.

In any case, we have permutations of the same letters in the set, we will end up with the same value for the sum and leading same key which leads to disastrous collisions. Secondly, we need a good table size, preferably a prime number.

How do we pick a good hash function?

Picking a “good” hash function is absolutely necessary to successfully implementing a hash table. The storing and retrieving data in O(1) time comes down to answering the above question.

There are certain things which makes a hash function goody-goody.

But, better hash functions are not.

The index for a specific string will be equal to the sum of ASCII values of characters multiplied by their respective order in the string after which it is modulo with some prime number like 29.

Here, each string will lead to a unique number, and with modulus a prime number, it is still possible that we may have collisions but maybe fewer collisions than when using a naive hash function like the sum of the characters.

I know you might be wondering do I have to go off and write such complicated hash functions?

The answer is No.

Most programming languages give us a perfectly acceptable hash function which does all this heavy work for us.