Measure performance of an Algorithm | The big O notation

I am in a Big problem!

I just received a birthday gift from my elder sister and I want to send a thank you message to her. But, the thing is I am running short on time. I want to get this task done as soon as possible. I’ve listed three ways in which I can solve this problem.

1) Sending a thank you note through post/mail.

2) I could ring her phone or compose an email to convey the message.

3) Or drive to her house and thank her in person.

But, which approach do you think would be fastest?

Approach 2, right? Yes, I was thinking the same.

My end goal of sending a thank you message can be easily accomplished by few clicks or a with one phone call.(Big assumption: Gossip time on the phone not counted)

Similarly, in order to solve any problem in computer science, we write programs. Every program — though can be written in a different programming language — like the one discussed above, can be solved in many ways. In the programming world, we call these ways/solutions as Algorithms.

What is an algorithm?

Oh, yeah, big word alert: What is an algorithm? An algorithm is nothing but a bunch of steps we undertake to achieve some goal, sister getting a thank you message in our above example. Let’s take our third approach to send thank you message to big sister.

Wait, you might be wondering, does that count as an algorithm? Sure it does!

Similarly, before jumping to write a program in computer science, we always write an algorithm; a bunch of steps required to accomplish the task or solve the problem.

But, you may ask: We had multiple solutions to our thank you message problem. How do we decide/analyze which algorithm is fastest and best to solve our problem?

Analysis of Algorithm? How do we analyze them?

Before I answer your previous questions, let’s try to solve an immediate issue which popped up. I will get back to how do we go about analyzing algorithm after solving this immediate issue.

Imagine this, you just joined a new development team and were given a piece of code. As you look through the code, you find two methods sort_1 and sort_2. Both these methods take same input in the form of an array of unsorted integer. And the function/method returns a sorted array i.e integers returned are in an order. Without going into code details, we can write the pseudo code as

Someone from the team comes and tells you, “Ah, one of this sorting method is faster than the other. But which one I can’t remember. Can you find out for me ?”

Newbies can’t say no. So, time to put on our Testing Caps.

Something which is very clear is that we still don’t know any full proof approach which will give us an accurate result. We might have to do a repeated test to get a good average result.

Test Plan: Let’s create an array of 100 random numbers. Let us call this sort_1 function inside a loop which runs 1,000 times and log time taken to sort numbers. Refer to the below pseudo code:

Test Result: After running this test, you’ll find, log times are pretty close.A difference of few percents maybe. We've got a fair idea how long these functions/methods each take to sort 100 numbers.

Side Note: The small difference in time is because sorting 100 numbers is a fairly small task for machines. Any algorithm you choose, unless extremely inefficient, you will find a difference of a few milliseconds only.

But, did it solve our problem yet? We still can’t figure out which one is fastest or better than other.

Test Result: Ah, this test did the job for us. With the humongous amount of data, you may find that one method beats other. Not just by few percents. Rather by a dramatic huge margin. One method could sort the array within a fraction of seconds and other is still sorting it for us.

I am sure you might be wondering is this even possible?

So, let me break this to you: this kind of result is not at all unusual. And this is one of the major reason and core challenges one faces with algorithm analysis.

The (correct) algorithms we write are neither slow or fast in itself. It would be very easy that way. It also very much depends on how much data we are asking these algorithms to work on.

My Computer Vs. SuperComputer

But, I ran both these tests on my computer. What if, I ran this algorithm on a supercomputer. Will the result still be same?

Factors like the speed of the processor, programming language used to implement it and hardware will drastically impact the run time of the algorithm.

So, now the main question is: how do we go about analyzing/measuring/estimating the time taken by algorithms to run ignoring low-level hardware details and subject to varied input sizes?

(Also, problem fondly known as how do we go about measuring Time Complexity of an algorithm)

What is Big O Notation?

What the heck is Big O Notation?

In computer science, we use Big O to classify algorithm where we express how quickly the run-time or space requirements grows relative to input, as the input size grows arbitrarily large.

Let me break the definition down into simpler words:

Sorry, it’s difficult to jot down the exact run time of an algorithm. Why you may ask. Remember, our computer vs supercomputer issue. Different hardware, processor speed affects total run-time of the algorithm. So instead of talking about run time directly, we use Big O to talk about how quickly the run time grows when the data (read: input) given to our algorithm increases.

Yes, I agree logging time would have been hassle free. But, since, we’re measuring how quickly our run time grows, we need to measure speed in terms of something else.

If all this explanation seems abstract so far, don’t worry. Let’s look at some examples analyzing our code with Big-O notation for more clarity.

When analyzing algorithms/operations, we often consider the worst-case scenario. What’s the worst that can happen to our algorithm and when does our algorithm will do some serious heavy-lifting work?

Let’s say you have a cabinet full of files. You may have many tasks like finding files, getting rid of duplicates etc. You also know that if there are more files in the cabinet, longer it will take you to accomplish your task.

Assuming we’ve to perform some of the task mentioned above. Here are few scenarios and ways in which we can find the file from the cabinet and their corresponding order of notation(operation’s time complexity).

Scenario/Problem: Let's say we want to find a particular file in the cabinet. But, the files stored in the cabinet are not sorted or alphabetized. How can we search for our file?

Approach: We will have to look at each and every file present in the cabinet till we can find our file.

Scenario/Problem: You need a file and remember exact location where you had kept the file.

Approach: Open the cabinet, pick the file from the location. End of the story.

Approach: We will have to pick the first file, check it against all the other files. Then take file number 2 and repeat the same action until you got to the last file.

Scenario: The files in the cabinet are in the order. We’ve to search a file marked with a label.

Approach: We can start in the middle, see in which half should be in, go to the middle of the half and repeat the steps until we found our file.

Let’s take a small algorithm where we’ve to calculate the complexity of the equation by throwing away: 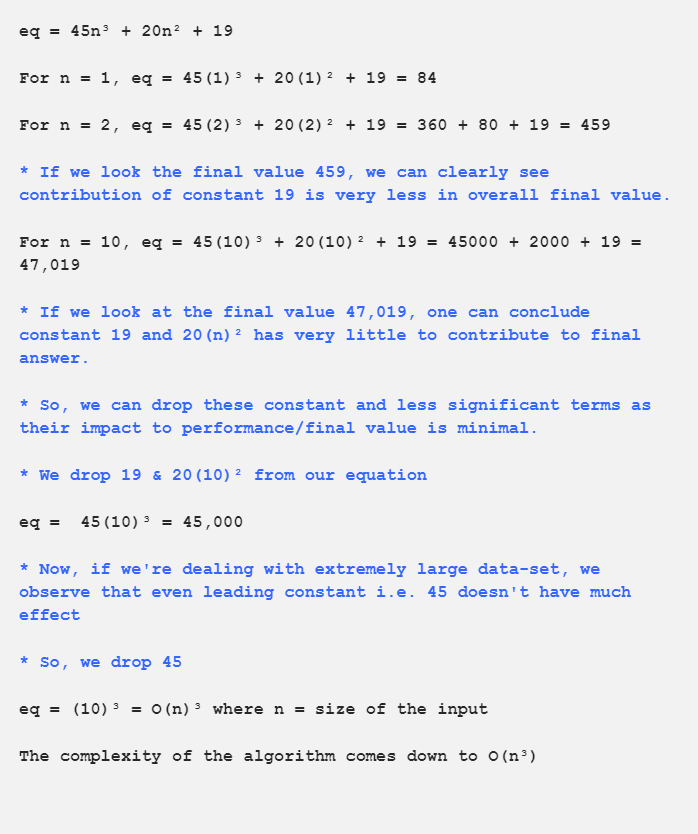 Why we do this?

If you can remember or scroll back to the definition of Big O, there’s a term in bold which states that when input size(n) grows arbitrarily large.

As n gets really big, adding 200 or dividing by 10 has a decreasingly significant effect. So, we can safely throw these terms out. We only concentrate on a principal activity which has the most impact.

What is Space Complexity?

(I know, I know this is the biggest Big O definition explanation in the history of mankind. This is the final concept I promise! )

We need to analyze or care about memory cost(space complexity) just like we did for our precious time. Best part there isn’t much difference between them.

Space complexity is space taken by algorithm to complete its algorithm relative to its input size.

Auxiliary Space is for the temporary variable. Not used in above example. We consider 1 unit for each variable present in our algorithm

Now, above method has an input of array and another input gives size/length of that array. An array has n elements, each will hold 1 unit of memory. So space taken by an array is (1n) where n = number of elements in the array

This is awesome except:

Big O is a powerful tool, but one should use it wisely. Sometimes there’s a tradeoff between saving time and saving space, so one has to take a crucial decision on what needs to be optimized.

Like Big O royally ignores constants and less significant terms. But, sometimes they matter too. Imagine, if we have got a script that goes on for 5 hours, an optimization that divides the runtime by 10 might not affect Big O, but it can still save us few hours of waiting. Also, beware of premature optimization.

Hence, it is rightly said that one must develop the skill to optimize time and space complexity as well as be wise enough to judge if these optimizations are worthwhile.