What are the different Test Levels in Software Testing?

To enhance the quality of software testing and to produce a unified testing methodology applicable across several projects, the testing process could be abstracted to different test levels.

In this article, we will focus on the different testing levels and their significance.

What are the different test levels in software testing?

Many different test levels help verify the behavior and performance of software testing. These test levels are designed to recognize missing areas and reconciliation between the phases of the software development life cycle. In SDLC models, there are characterized phases such as the gathering of requirements, analysis, design, coding or execution, testing, and implementation. All these phases go through the process of software test levels.

The software is tested at different levels. Initially, the individual units are tested alone and once they are tested, the interfaces established between them are integrated and checked. After this, all software is tested to ensure that the output produced conforms to the user's requirements.

There are mainly four levels of testing. We will briefly explain all these levels and a detailed description of each of these levels will be taken up as separate articles.

Unit tests are performed to test individual software units. Since the software comprises several units/modules, error detection in a single unit is simple, cost-effective and less time-consuming. The Unit test ensures that the functional and the non-functional behavior of the component is designed as per specification. Below are some of the key considerations for Unit tests:-

Once Integration testing is completed successfully, we move on to the next level of testing, which is called System testing. IEEE defines the system tests as "A testing performed on a complete and integrated system to check the system's compliance with its specific requirements". System testing can be classified as :

Some of the considerations for System testing are as follows :

Acceptance testing could be of various types, some of the key ones are listed below.

Test levels have a hierarchical structure that accumulates from the bottom up. Where the upper levels assume the satisfactory completion of the lower level tests. Each of these levels of testing has a specific goal, and that helps ensure minimal repetition across the levels. Without this structured approach, a big-bang test approach, which would mean doing multiple test levels in parallel would be a very daunting task. Below is the diagrammatic representation of the test levels. 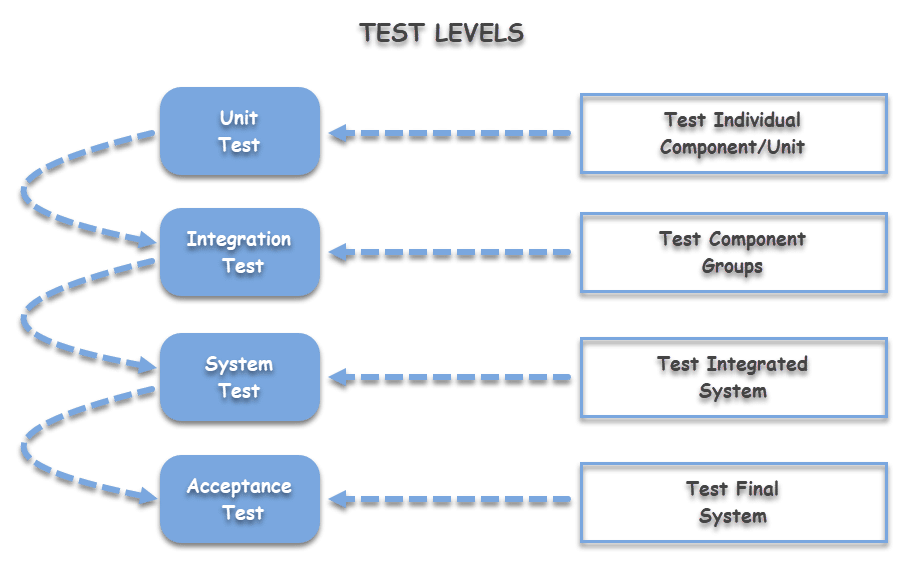 Attributes of the Test Levels

Test levels are characterized by the following attributes:

Each level of testing is characterized by an environment, that is, a type of hardware, software, data, and interface. We also found that Unit and Integration testing are usually performed in a development environment. While for System and Acceptance testing, a production-like test environment is ideal.

The cost of maintaining the software is much more than the cost of producing the software. To reduce this maintenance cost, the testing process across each of these levels should be efficient and well planned.